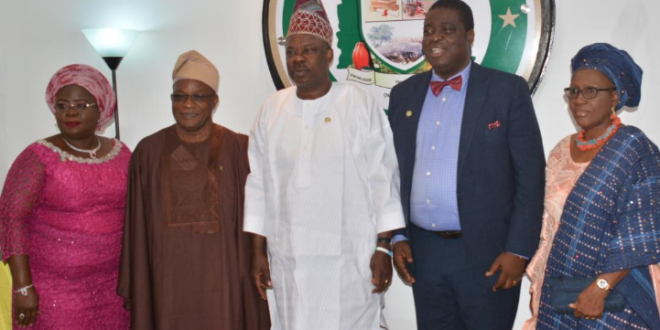 Governor Amosun while inaugurating the council, charged them to make the institution a force to reckoned with nationally and globally.

He said the facilities on ground can accommodate about 3,000 students with students’ hostel and staff quarters.

Amosun said, “our administration know the importance of education and that is why when we came on board, we took it as priority and we made it free at the primary and secondary sector, while we subsidized our tertiary education”.

Speaking on the newly inaugurated Council, the Governor noted that its members have been found worthy and that was why they have been appointed as the pioneer Governing Council, to see to the affairs of the institution.

In his remarks, the Chairman of the Council, Ambassador  Isiaka Adesola Abodunrin promised to bring on board expertise and great knowledge for effective running of the institution.

Abodunrin said, though, it is a great challenge to be appointed as pioneer members of the governing council, but assured that his team would not disappoint the trust and responsibility bestowed in them.

He pledged the council’s loyalty to achieve the set goal, calling on all stakeholders to join hands to strengthen the institution to become a great citadel of knowledge.

Speaking with pressmen at the inauguration, the Rector of the Polytechnic, Dr. Samson Odedina, assured that the leadership of the institution was ready for smooth take off.

Odedina said that, the inauguration signal new beginning for a  quality tertiary institution which will give birth to quality output in terms of students’ performances in job market and role models to other youths in job creation.

Odedina said the polytechnic will focus majorly on entrepreneurship development programmes to reduce unemployment rates in the labour market.

His words “our major focus in the Polytechnic will be zero unemployment rates for our students, making them employers’ favourites as well as being employers of labour”.

He stressed that with the assurance from the state government and available resources, the polytechnic will be a cynosure for transformational and developmental programmes.

The Rector opined that the institution will be of world class standard where students will be more of employers than waiting for employment thereby making them role models to other youths in the society.

Previous Why Simi Says; Yahoo Boys Should Stop Buying My Music
Next Davido Cries Hot Tears, Reveals What His Gang Doing To Him In US For Months