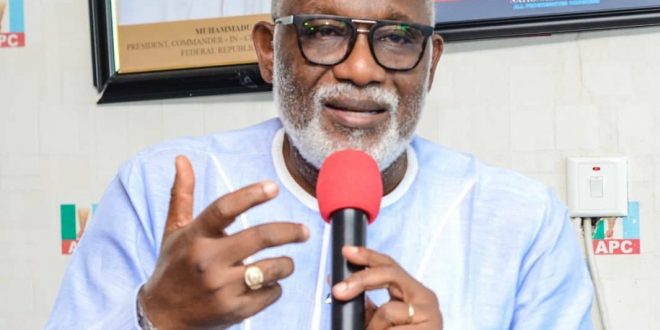 Governor Rotimi Akeredolu of Ondo state has criticised hate speech bill currently in the Senate, saying that a free country should encourage genuine advocates to present alternate views to government and the people.

Delivering his keynote address at the sixth biennial international conference of the Centre for Peace and Strategic Studies (CPSS) of the University of Ilorin on Monday, Governor Akeredolu said that a strong presence of civil society organizations deters executive recklessness, while other arms too would not be spared.

The governor, a former president of the Nigerian Bar Association (NBA), condemned the death penalty for offenders of hate speech as earlier contained in the bill, saying that freedom of speech must be respected.

“As NBA president, I didn’t support capital punishment, why should I become a turncoat as a governor to now support capital punishment. I’ve said it that I won’t sign a death penalty for all those convicted criminals who had received death sentences from courts in Ondo state. It is either I commute it to life imprisonment or people should wait for another governor to sign it.

“When I didn’t support capital punishment for crimes that attract the death penalty, why would I support the death sentence for hate speech. I believe people should talk when they’re aggrieved, hurt or have agitating opinion to express”, he said.

Talking on the theme of the conference, Domesticating sustainable development goal 16 in Nigeria: Peace, justice and strong institutions, Governor Akeredolu said the absence of justice is largely responsible for deplorable conditions militating against peace in the country.

He, therefore, advised that leaders should invest in justice in order to reduce anger, unrest etc in the country.

“Current measures put in place seem insufficient to rescue the country from socioeconomic doldrums.     Therefore, the preponderance of conflicts in virtually all parts of the country seems to suggest the failure of the system. Working at these manifest lapses will assist, greatly. A country’s progress cannot be anchored on the wisdom and integrity of a superhuman being, even if discounting these virtues bears inherently destructive seeds in the life of a country. Institutions of state must be self-regulating.

The basic law of the land, the constitution, and relevant subsidiary legislations must be the instruments which determine the life and functions of any institution created to take care of the welfare of the people. These institutions, recognized by the law of the land, must be above all persons and groups” he said.

The governor, who said that peace is not achieved by mere wishful thinking or desires, added that “we should be concerned with how to prevent the occurrence of the tragedies which force people out of their communities to take refuge in places where they are more vulnerable”