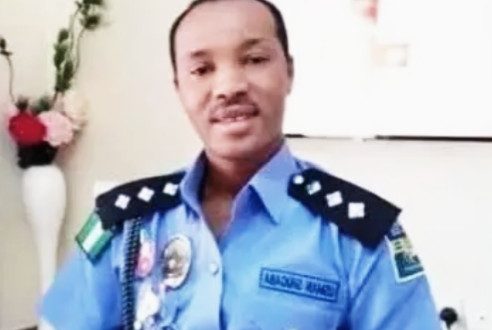 ABUJA: The Nigeria’s First Lady Aide-de-camp, Usman Shugaba, has been released on Monday, June 15, 2020 by the police authorities after being arrested and detained since last week, alongside other security personnel attached to the First Lady, Sahara Reporters has reported.

According to Sahara Reporters, Shugaba was released earlier on Monday and immediately reassigned to the Force Headquarters in Abuja.
Recall he was arrested as a result of the rumble at the Presidential Villa which involved the First Lady and a President’s Personal Assistant, Sabiu Yusuf.

Shagaba has been enmeshed in the power play at the Aso Rock between the First Lady and some powerful aides that are close to the President. Because of her closeness to the First Lady, Shugaba is also seen as a threat as Mrs. Buhari is considered as their major stumbling block in continuing to ‘manipulate’ the President in their favour.

Shugaba was responsible for forcing away Sabiu Yusuf who refused to self-isolate in the Villa after a trip to Lagos, and then back to Abuja. For trying to force his way to the Villa, Shugaba and his colleagues rough-handled Yusuf, who later escaped to the residence of Mamman Daura, Buhari’s nephew and member of the ‘cabal’, on Thursday evening.

Subsequently, Shugaba was arrested and detained for a week before his release Monday.

Publisher and Editor in Chief - Magazine and Online Tel: 08038525526 - 08023339764 - 08055657329 Email: startrendinter@gmail.com
Previous Fresh Protests Against Racism Rocks USA After Another Police Shooting, Confirming TB Joshua’s Prophecy
Next How I Met And Fell In Love With Goodluck Jonathan – Patience Jonathan