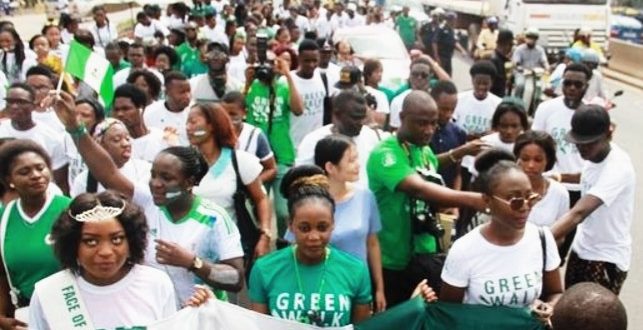 ABEOKUTA: As the country celebrated 59th-year Independence, a group in Ogun State, Ogun State Youths Advocate on Tuesday, October 1, 2019, appealed to the federal government to, without alacrity combat the high level of unemployment among the youths.
The group made the appeal in Abeokuta, the State capital when it paid a visit on Stella Obasanjo Children’s Home, Abeokuta, donating money and various food items to the home.

Among the items donated were, bags of rice, cartoons of noodles, fruit juice, beverages among many others.

The Chairman of the group, Comrade Alao Oluseyi stressed that the group was committed to fighting for the interest of youths in the state, especially in the area of employment.

Displeased, Oluseyi lamented that Nigeria leaders who are supposed to serve as Messiah for youths in the country rather see them ( youths) and use them as thugs to fight for their political interest.

He vehemently warned politicians who indulge the act to desist immediately before justice over take them.

His words, “We are advocating for employment for the youths, but we are here today to visit the motherless babies so that they can know their importance in the society. We are also celebrating this day with them.

“In Ogun State Youths Advocate, we are trying our best to make sure all the youths in Ogun state enjoy the dividends of democracy. Ogun state government is in support of what we are doing. We appreciate the Governor when he came on board to speak for Ogun youths.”

The Public Relations Officer (PRO) of the Group, Comerade Odeyinka Temitayo, who spoke in the same vein regretted that Nigerian government only believe that youths are miscreants, hence, they see them as thugs.

Odeyinka said, “Government believe that youths are to be used for vices, but we are out to say that, we youths can have a stake in the government, we are saying we have something sensibles to offer the society, that is why our slogan is “voice for the voiceless”.

Government shouldn’t see youths as miscreants, we are sensible people.

“We are in support of the state government. We are independent, we believe in giving back to the society in our own way of wiping out unemployment in Ogun state.”

He stated further, “We also gathered youths in the State and collect their CVs and present it to the government for employment”.