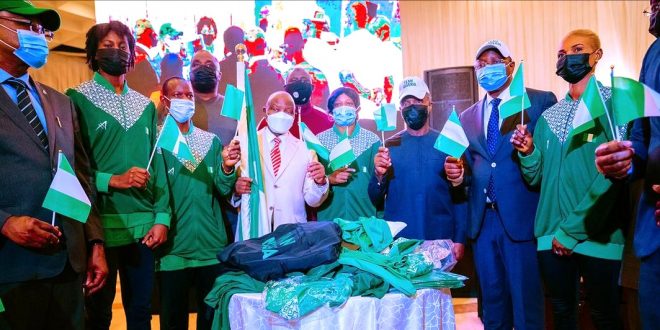 “YOU STAND ON THE SHOULDERS OF GIANTS”, OSINBAJO TELLS NIGERIA’S OLYMPICS TEAM 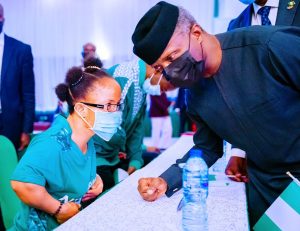 ABUJA – As Team Nigeria to the 2020 Tokyo Olympics prepares to leave the shores of the country, Vice President Yemi Osinbajo, SAN, has called on the team to replicate the outstanding performances of past Nigerian Olympians, noting that “you stand on the shoulders of giants.”

According to a release e-signed and made available to StarTrend Int’l & online – www.startrendinternational.com by Laolu Akande, Senior Special Assistant to the President on Media & Publicity, Office of the Vice President, Osinbajo recalls the exploits of past Nigerian teams, adding that “you will also carry with you the encouragement of the great exploits of Nigerian Olympians before you.”

Prof. Osinbajo stated this today at the send forth ceremony for Team Nigeria to the Tokyo 2020 Olympic Games, at the Presidential Villa. The event also marked the formal handover of the Nigerian contingent to the Nigeria Olympic Committee and the unveiling of the team’s official outfit and kit.

He reminded the team of “such legends as Chioma Ajunwa who won the gold medal at the 1996 Olympics for the long jump and became the first black African woman to win an Olympic gold medal in a field event.

“The Super Eagles in 1996 who won the gold medal for football; that was the team that had the greats; Augustine Okocha, Celestine Babayaro, Daniel Amokachi (who was present at the event,) Sunday Oliseh, Taribo West, Kanu Nwankwo, Abiodun Obafemi, Emmanuel Amuneke, Emmanuel Babayaro, Garba Lawal, Joseph Dosu, Kingsley Obiekwu, Mobi Obaraku, Uche Okechukwu, Teslim Fatusi, Tijani Babangida, Victor Ikpeba, and Wilson Oruma —that was the year we defeated the world’s best footballing nations – Brazil and Argentina and we all held our heads high.”

Continuing, the VP said “in 2000, in Sydney again we beat the best in the world, we won the gold in 4×400 meter relay after the American team was disqualified for using performance-enhancing drugs. Our team then was Clement Chukwu, the late Sunday Bada, Enefiok Udo-Ubong, Jude Monye, and two other members of the team, Fidelis Gadzama and Nduka Awazie.

“And for anyone who thinks we are joking, maybe they haven’t seen our exhibition basketball game on Saturday with the USA team, especially that amazing block by Precious Achiuwa against KD – Kevin Durant, who is probably the best player in the NBA right now. So Precious, you are the real MVP!

“You stand on the shoulders of giants and with the quality and intensity of training you have received and your exploits during the qualification series for the Olympic Games, I am confident that by God’s grace, you will again make history and beat the best in the world.” 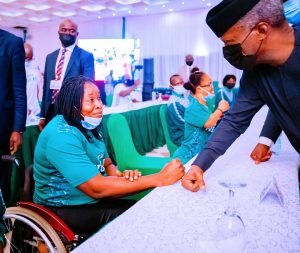 Urging the team to promote the Olympian ideals, Prof. Osinbajo said “Olympics is about fair play, honesty, teamwork, respect, and friendship. I trust that you will, as worthy ambassadors of Nigeria, represent our nation excellently.

“Fair play clearly enjoins every athlete not to use any prohibited substances or to cheat in any way. Half of the joy and satisfaction of victory is that it was won fairly.”

“Every one of you participating in the games is opening a page in history for yourself, your families, your community, and the nation.”

Prof. Osinbajo then assured the team of the prayers and support of all Nigerians as they compete with athletes from other nations.

His words: “Your performance at the games will inscribe your names in national and world sporting history. You carry the hopes and aspirations of millions as you compete in Tokyo. But you will in this endeavor, have the assurance of the prayers and best wishes of all Nigerians.”

While commending the Minister of Youth and Sports Development, Sunday Dare for coordinating the various sporting Federations in preparation for the Games, the Vice President urged the athletes to make good use of facilities at its training ground in the City of Kizarazu to put themselves in proper shape ahead of the Games.

He urged the team to continue to observe all COVID-19 protocols and to strictly adhere to the IOC Playbook in order to safeguard their health and those of others around them.

Earlier in his remarks, the Minister of Youth and Sports Development, Mr Sunday Dare, said the athletes were ready to do the country proud and presented to the Vice President, the made-in-Nigeria kits for the Nigerian contingent.

“I am happy to announce today that the complete kit for Team Nigeria to the Tokyo 2020 Games was produced with a heavy dose of local content. We thank AFA Sports, Africa For Africa, a local sports equipment manufacturing company for delivering on the production of uniforms for Team Nigeria. This is a veritable testament and commitment of the Buhari administration to support and grow local content and industry in all sectors of the Nigerian economy.”

On his part, President of the Nigeria Olympic Committee, Engr Habu Gumel thanked the President and the Vice President for honoring Team Nigeria and assured that the contingent will not disappoint the country. 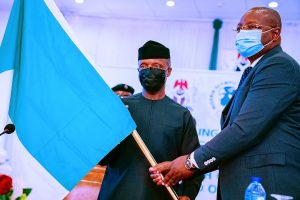 “I am happy to inform Mr. President that all the 15 athletes on Olympic Scholarships qualified for the Tokyo Olympic Games. Despite the challenges of the Covid-19 pandemic, which slowed down the training momentum for the Games, we are still optimistic that the crop of Nigerian qualified athletes will do our nation proud at the Tokyo Olympic Games.

One highpoint of the occasion was the formal handover of Team Nigeria to the Nigeria Olympic Committee by the Vice President and the Sports Minister, and the unveiling of the official outfit and kit of the team.

Present at the ceremony were Federal Legislators, officials of the Japanese Embassy in Nigeria, 45 athletes and their coaches, officials of the Ministry of Youth and Sports Development, and the Nigeria Olympic Committee, among others.

Publisher and Editor in Chief - Magazine and Online Tel: 08038525526 - 08023339764 - 08055657329 Email: startrendinter@gmail.com
Previous FG’S DEPLOYMENT OF FALCON EYE SURVEILLANCE WILL SAVE NIGERIA BILLIONS OF DOLLARS LOST TO PIRACY, SEA ROBBERY, CRIMES – OSINBAJO
Next LIFTING 100M NIGERIANS OUT OF POVERTY: WHAT WE NEED IS A SIMPLE, COMMON-SENSE APPROACH – OSINBAJO