Breaking News
Home / HEADLINE / You Are A Sheep In The Midst Of Wolves, UK-Based Pastor Akinmade Tells Osinbajo 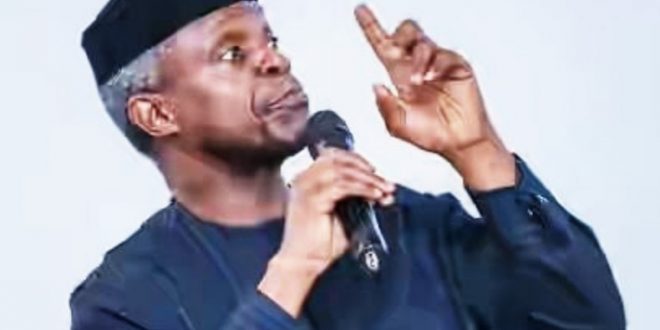 You Are A Sheep In The Midst Of Wolves, UK-Based Pastor Akinmade Tells Osinbajo

Idowu Hamed September 22, 2019 HEADLINE, NEWS Comments Off on You Are A Sheep In The Midst Of Wolves, UK-Based Pastor Akinmade Tells Osinbajo 58 Views

Pastor Ken Akinmade of Christ Church, London, UK on Sunday September 22, 2019 said there is a concerted effort by some people in power to bring down the Vice President, Prof. Yemi Osinbajo.

Pastor Akinmade said that some of the people who were working frantically to drag the name and integrity of the Osinbajo in the mud were even people from his geo-political region, the South West.

He explained that they were deploying resources to fight the Vice President, stressing that, Nigerians must pray for the well-being of the number two man.

The cleric stated further that he saw in a vision, some politicians gathering and in their midst were some journalists too.

“They were planning how they will disgrace the Vice President and ridicule him in the eyes of Nigerians, using fake news.

“The Bible is very clear. “Gather they shall gather, but if their gathering is not of the Lord Almighty it will be destroyed and scattered.” I enjoin all Nigerians to pray for the Vice President,” he said.

Pastor Akinmade noted that “the story of Osinbajo is not different from those of Mordecai and Daniel in the Bible who evil people schemed against, but eventually fell for their own plot.”

He urged Nigerians to be wary of any negative report or stories that are in the media about the Vice President.

“It was then I realized that there was no proof or evidence against him, it was then I saw that they had only gathered against God’s choosen to do him evil and in that instance I began to pray in the spirit,” he posited.

Pastor Akinmade warned the Vice President Osinbajo to be careful of those around him and those who are his friends, especially politically and spiritually.

He also warned him to be careful of some people from the South Western part of Nigeria.

“Osinbajo’s biggest enemies are those from the South, mainly the South West. Those who he might think are his brothers and sisters are among those who have ganged up against him. They have seen his glory and they are trying everything humanly possible, but they forget that man is not God,” Pastor Akinmade enthused.

The man of God urged Nigerians to pray for the Vice President Osinbajo, noting that the will of God cannot be truncated at all, saying, “I do not know the Vice President personally, but this is what I have to say to him, Sir, be very prayerful. You are a sheep in the midst of wolves.”