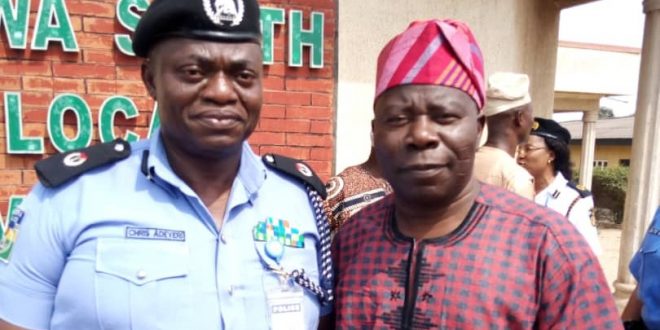 The Transition Chairman who gave the assurance while speaking with newsmen after the council’s monthly security meeting with the various security agencies in the area pointed out that, the authority of the council and the security agencies at the meeting strategized on how to maintain and sustain the existing peaceful atmosphere in Yewa South and its environs.

Alhaji Fagbenro while assuring that there would not be any form of violence in the area, said that his administration was trying to key into the security agenda of the state Governor, Prince Dapo Abiodun of the provision of adequate security and emulate the state Governor’s style of securing lives and properties.

Hear him, “The meeting with the security agencies was very successful. We discussed on how to make our Local Government more secure and also strategize on how to maintain and sustain the current peaceful atmosphere that we are witnessing in Yewa South Local Government.

“We itemized some of the strategic areas that we want to work and focus on, such as; the Okada riders and their parks, the vehicle owners, the union and their parks, base and junctions amongst others.

The Yewa South LG boss stated further, The Local Government is emulating and stepping into the shoes of the Governor, Prince Dapo Abiodun in his quest to give the people adequate security.

“Because, without adequate and proper security there won’t be progress. Look at what is happening in the North East now. We don’t pray for that in this state and the Local Government. So, the

Governor is putting necessary measure in place to secure lives and properties of the people across the state and that is exactly what we are doing here in Yewa South Local Government”.

Alhaji Fagbenro however advised people of the area to be law abiding and cooperate with the law enforcement agencies for the progress and socioeconomic development of the area.