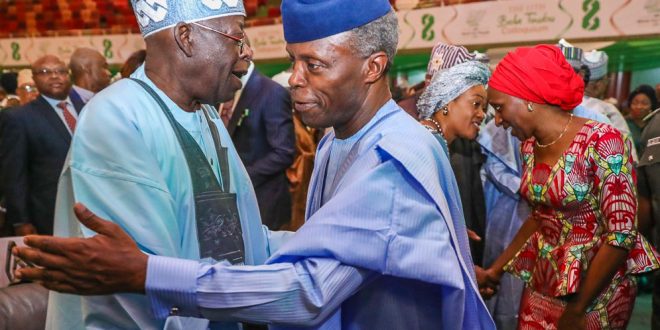 Yakasai Says, APC Might Field Tinubu Or Osinbajo In 2023

Tanko Yakasai, elder statesman and political adviser in the second Republic, says the ruling All Progressives Congress (APC) might field Vice-President Yemi Osinbajo or Bola Tinubu, a national leader of APC, in 2023.

Speaking with The Interview, Yakasai said the region played a key role in the emergence of Buhari in 2019.

On the possibility of the APC fielding a presidential candidate from the south-east in 2013, Yakasai said the region will be sidelined for the south-west.

“The current calculation is that the vice-president is from the Southwest. Clearly, there is an unwritten understanding that when Buhari finishes, the Vice President will likely be the next presidential candidate of the APC,” he said.

“The Vice President is a Yoruba man. Even if it is not Osinbajo, somebody from there, probably Tinubu, will likely emerge as the candidate of the party.

“And with the performance of the party in the southeast, I don’t see any possibility that the party will think of giving its candidacy to the southeast as against the support it earned from the southwest.

“Apart from voting, don’t forget that there were some material supports which APC enjoyed from the Southwest.”

Defending his choice of Atiku Abubakar of the Peoples Democratic Party (PDP), in the elections, the elder statesman said he supported Atiku because of his experience in governance and business.

Yakasai was asked: “You supported former Vice President Atiku Abubakar and the PDP at the just concluded election. Do you believe the eventual winner, Muhammadu Buhari, won fair and square?”

He replied: “No, I do not. Quite alright, I supported Atiku because I don’t believe that Buhari has the capacity and the competence to handle the Nigerian problem.”

On the issue of the leadership of the 9th senate, Yakasai said it would not favour the All Progressives Congress (APC) to insist on Ahmed Lawan.

Lawan, senate majority leader, has been given the blessings of the APC to succeed Bukola Saraki as the leader of the red chamber.

Yakasai said he expected the ruling party to have learnt from its mistakes.

He argued that the lawmakers should be allowed to choose who will lead them, and not a person imposed on them.

“Well, they have been touting this idea for a long time. Remember when the current Senate was convened after the 2015 election, they wanted Ahmad Lawan to be the Senate president,” he said.

“It was the rupture in the party that led a chunk of party senators to team up with PDP senators to get Bukola Saraki and Ike Ekweremadu as president and deputy president of the Senate.

“What I am surprised about, I thought what happened to them in the last dispensation would have been a lesson for them to allow legislators to decide who should be their leaders.

“I worked with National Assembly for four years. I know the mindset of members of the National Assembly. They believe that they have their own mandate separate from the mandate of the President.”

Tags APC Might Field Tinubu Or Osinbajo In 2023# Yakasai Says