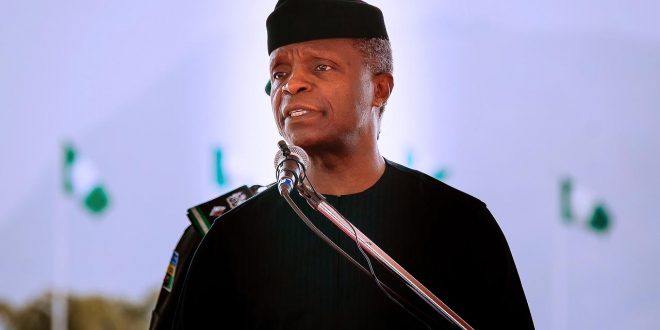 ABUJA – Vice President Yemi Osinbajo, SAN, has said that amid tight fiscal revenue generation, especially in the States of the Federation, agriculture can be a significant contributor to government coffers, boosting resource mobilization.

According to a release e-signed and made available to StarTrend Int’l & online – www.startrendinternational.com by Laolu Akande, Senior Special Assistant to the President on Media & Publicity, Office of the Vice President, Osinbajo expressed this view on Tuesday, March 15, 2022 while interacting with a delegation from the Development Agenda for Western Nigeria (DAWN) Commission, who was on a courtesy visit to the Presidential Villa, Abuja noted that all it takes is the hardwork and dedication of all stakeholders in the sector..

Prof. Osinbajo who spoke after listening to a presentation on the Commission’s framework for sustainable agricultural transformation in the states said, “agriculture can be the solution to a lot of our IGR needs and a lot of our resource needs; it has been proven so many times that it is possible.”

Making reference to what was obtainable in the 1950s and 60s in the agricultural sector in the then regional governments, the Vice President noted that “the truth of the matter is that the difference between then and now is the political will. There is no question at all that there is far more information today than there was then but someone has to have the will to do it.

“There is no question at all, that any part of Nigeria, if there is sufficient dedication and hard work, can feed the entire country. There are smaller countries not up to the size of one State in Nigeria that are producing enough and exporting produce to other parts of the world.”

The Vice President also acknowledged the importance of private sector collaboration in transforming agriculture but emphasized the need for stakeholders to focus on research and development, noting that the progress made by some countries of the world, especially in the area of commercial farming have been hinged on research.

According to him, “obviously, what will take us out of the woods and make us relevant in terms of export and even in terms of satisfying local demands is commercial farming.”

“Of course, it involves logistics, transportation, credit facility, etc. A lot more attention needs to be paid to how that value chain works. No matter how much you are producing, if you don’t work on the value chain, you will just be wasting a lot of the resources.”

With respect to government policy, Prof. Osinbajo said “we have been doing a lot of work with agro-export in particular. One of the problems that we are faced with is even with the whole process of exporting. We are addressing the problem, we have had several meetings with agro exporters. It is among the issues that we are trying to pay attention to.”

The Vice President then commended the DAWN Commission for its efforts, noting that “the work that the commission is doing is seminal. It is work not just for the present but perhaps for the future of the South-West region and of course of the entire nation.

During the presentation by the delegation, the role of young people in agriculture was mentioned. The example of a young agric entrepreneur, who was part of the delegation, CEO of Smart Farm Nigeria, Ms Modupe Oyetoso, came up.  Despite initial setbacks and personal tragedy, Oyetoso persisted and is now thriving in the agriculture sector.

Commenting, the Vice President praised her courage and commended “the great fortitude that you have shown. I must commend you and to say that we are all greatly encouraged by the work that you have done. I hope that many hearing your story and the successes that have followed will be encouraged to go into commercial farming.”

Earlier in his remarks, the Director-General of DAWN, Mr Seye Oyeleye, briefed the VP on the efforts made over the years, reporting that the commission has developed blueprints for the development of the health and education sectors in the 6 States of the South-West.

He also cited the revitalization of cocoa production and the framework for sustainable agricultural transformation in the region, among achievements recorded by the commission in the 9 years of its establishment.

In the presentation of the agricultural transformation plan, Mrs Abiodun Oladipo, a member of the delegation said the commission among other things, aims to facilitate the operationalization of existing Staple Crop Processing Zone (SCPZ) master plans as part of the broad objective of transforming farming in the region.

Publisher and Editor in Chief - Magazine and Online Tel: 08038525526 - 08023339764 - 08055657329 Email: startrendinter@gmail.com
Previous No Country In The World Can Develop Further Without Contributions Of Its Scientists – Osinbajo
Next Gov. Abiodun Gets Vanguard Newspaper’s 2021 Best Governor Of The Year Nomination