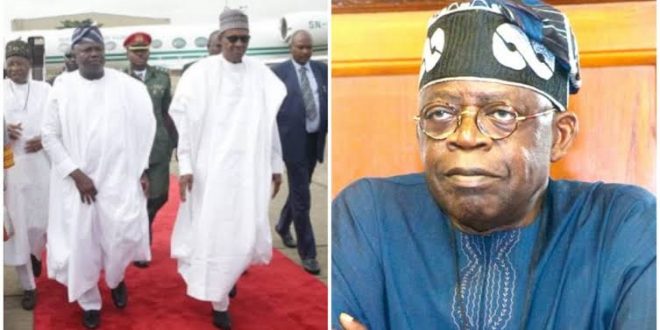 Why Tinubu Stayed Away From Buhari’s Lagos Visit

Contrary to the official position that a former governor of Lagos State and one of the national leaders of the All Progressives Congress (APC), Bola Tinubu, was absent at last week’s visit of President Muhammadu Buhari to Lagos, because he was out of the country.

THISDAY gathered that Tinubu deliberately stayed away, because he had personally asked Governor Akinwunmi Ambode not to inaugurate any of those projects but leave them to his successor-elect, Babajide Sanwo-Olu, an order the governor eventually defied.

The president’s visit also attracted Governors Ibikunle Amosun (Ogun), Abiola Ajimobi (Oyo), Kayode Fayemi (Ekiti) and Rotimi Akeredolu (Ondo), Sanwo-Olu and his deputy-to-be, Obafemi Hamzat as well as many other dignitaries, both from the capital city, Abuja and the state. But Tinubu was conspicuously absent.

However, Tinubu’s media office had quickly reacted to the barrage of questions that attended the absence of their principal during the president’s Lagos visit, especially against the backdrop of insinuations that it could be in retaliation to the president’s absence at the colloquium organised last month to mark Tinubu’s 67th birthday, saying it was not deliberate.

Asked yesterday night to respond specifically to whether his principal at any time directed the governor not to inaugurate the projects, Rahman further stated in a text message to THISDAY, “His Excellency, Asiwaju Bola Tinubu was out of the country at the time. He was working on the initial schedule under which President Muhammadu Buhari was to be in Lagos April 29th and 30th. So he had planned his itinerary abroad taking that timing into cognizance.

Even the President was aware of Asiwaju’s trip. So he did not boycott or deliberately stay away from the event. If you claim Asiwaju told Governor Ambode not to inaugurate the projects, I’m really not aware of that. And that’s the truth.”

But THISDAY findings have shown that Tinubu and Ambode have actually had a conversation on the matter and the former Lagos governor was alleged to have pointedly told Ambode to forget the idea of inaugurating the projects and letting Sanwo-Olu come in, finish them off and then inaugurate them.

Believed to have felt inadequate by that charge, Ambode was said to have run his conversation with Tinubu with a few people, including the president, a majority of whom felt it was unfair to have compelled him not to take the glory for his own work especially, that he wanted to inaugurate them by himself, even though time would not allow him to completely finish them off.

Therefore, when the development was communicated to Tinubu, he considered it a slight and therefore chose to be away about the same time, since it would be indefensible to be in town and not attend a programme that featured the president, whom he recently led to victory for another term of four years.

Incidentally, this is happening at a time Ambode is said to have been penciled in for a ministerial position, representing the South-west slot, the reason all the South-west governors apart from Osun, who is currently being ruled by one of Tinubu’s cousins, Mr. Gboyega Oyetola, were in attendance.

The decision to bring Ambode into the Buhari political family, often referred to as the ‘Abuja boys’, was believed to have been informed by the fact that the president did not like the way the outgoing governor was treated to the ignominy of not returning to office, more so that he personally intervened on his behalf on two different occasions, but his intervention failed to save Ambode from losing his re-election ticket to the perceived prebendal politics of the state.

It was against this backdrop that the president was said to have consulted with other stakeholders from the region and came up with the decision to include Ambode in his next cabinet, albeit representing the South-west geo-political zone, a move many believed would soon set the President and Tinubu on war path.

Curiously, however, the last may not have been heard of Ambode’s many battles with the political forces in Lagos state, a crucial example being the refusal by the state House of Assembly to pass his 2019 budget, which he struggled to lay before the parliament sometime in February.

Ambode and the state assembly have had a running battle over the 2019 budget as some members of the state assembly felt his approach, preparatory to the presentation of the budget, breached what they considered the understanding and camaraderie between the executive and the legislature, including their alleged probe of some of the finances of the state.

This, at a time, had resulted in genuine impeachment threats against the governor, a development that was eventually staved off through the pressured intervention of Tinubu and other stakeholders in the state’s body polity like the Governor’s Advisory Council (GAC), the same group that jointly denied him his re-election ticket.

But fears that the assembly might not pass the budget especially that many now feel it was deliberate on the part of the legislature to starve the governor of funds in the twilight of his administration was confirmed at the weekend, when it suspended debate on the 2019 budget.

Expectations had been high that the lawmakers would finally pass the budget on Friday, but they stood down the debate that could have culminated in passing the bill on account of the excuse that they needed to study the voluminous report submitted by the Hon, GbolahanYishawu Appropriation Committee, which was assigned to look into the budget details.

After the presentation of the report by Yishawu, the Majority Leader, Sanai Agunbiade, reportedly argued that because of the volume of the report and its technicality, the House would have to choose another day for a comprehensive debate of the report, meaning it was after the debate and necessary amendments that the third reading of the Bill could be taken before its eventual passage.

Consequently, the Speaker, Mudashiru Obasa, concurred to the logic and ruled in favour of the deferment of the debate.

However, if the recommendations of the Appropriation committee were adopted by the House, it would mean that the size of the budget would have scaled up from its initial N852.317 billion to N874.96 billion, indicating a difference of about N22.541b from the figures presented to the House by the governor in February, in addition to the fact that the committee had reportedly done a major surgery to the budget by re-allocating funds to different ministries and projects as it deemed fit.

This development, as a result, makes it the first time since the nation’s return to civil rule in 1999, that the Lagos Assembly has not passed an appropriation bill by the end of April of the same year.

Tags Why Tinubu Stayed Away From Buhari’s Lagos Visit#