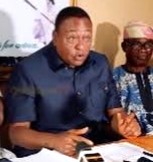 LAGOS – The Theatre Arts and Motion Pictures Practitioners Association of Nigeria (TAMPAN) has barred its registered directors from hiring or working with actresses Iyabo Ojo and Nkechi Blessing.

TAMPAN executives at a recent press briefing instructed that its members to desist from working with the actresses over claims that they have, in recent times, disrespected the association on social media.

TAMPAN’s press statement reads: “The attention of the Board of Trustees of TAMPAN and Elders of the Motion Picture Industry, especially of the Yoruba sector, have been drawn to the malicious damages being done to our sector by some unruly individuals that lack any iota of discipline and seeming to feel to be above the law.

“As you may be aware, certain unpleasant things have happened lately that has dragged the name of our association, TAMPAN in particular and the industry in general in the mud, which in totality are against what we stand for as individuals and as a group of professionals.

“We particularly observe the continuous derogatory statements made by Iyabo Ojo against the Association and the industry as a whole.

“However, Iyabo Ojo’s reckless accusations, abuses and embarrassment of our sector is also totally condemned.

“Unfortunately, Nkechi Blessing has also joined in the Ignoble tirades against the Association and by extension, the industry and we say enough is enough!

“As pioneers of this noble industry, if we fold our arms and allow the continuous blackmail that send negative signals across the world to go unchecked, the current situation that had impugned on our integrity will continue to grow to the detriment of humble practitioners, whose only source of livelihood is the practice of indigenous language movies (promoting language to preserve culture).”

Recall that this will not be the first time the association will bar Nkechi Blessing. The actress was barred alongside actor, Adams Kehinde over their online scuffle amid Baba Ijesha child molestation case.

Speaking on the association’s position on the ongoing Baba Ijesha case, veteran actor Bolaji Amusan aka Mr Latin said: “We as an association, have stayed away from making comments on the Lanre Omiyinka (Baba Ijesha) saga because we believe in the rule of law, due process and the ability of the courts of the land to do justice in such a way that it will be deemed to have been done without necessarily been swayed by emotions or influenced by sympathies.”