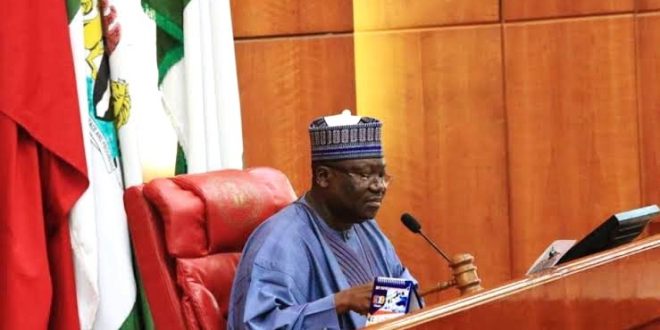 Idowu Hamed June 2, 2021 EDUCATION, HEADLINE, NEWS Comments Off on WHY SENATE APPROVES UPGRADE OF ILARO POLY TO A UNIVERSITY  OF TECHNOLOGY 282 Views

According to a release e-signed and made available to StarTrend Int’l & online – www.startrendinternational.com by Chief Kayode Odunaro, Media Adviser to Senator Solomon Adeola, the bill was originally sponsored by Senator Solomon Adeola in the 8th Senate, but could not be passed before the expiration of the 8th Senate and it was again represented in the 9th Senate for consideration and passage.

Presenting the report of the Senate Committee on Tertiary Institutions and TETFUND, Senator Sadiq Umar Sulaiman (APC, Kwara) on behalf of chairman of the committee, Senator Ahmad Babba-Kaita (APC, Katsina

North), said there is need to expand opportunities for advance education in technology, adding that the upgrade of the Federal Polytechnic, Ilaro to a University of Technology will be of tremendous benefits for the host

communities, provide employment as well as educational development, and it would quickly increase avenue for degree awards in technological fields for teeming Nigerian youths.

The bill which was passed after thorough consideration of its clauses by the Senate in plenary is now set for concurrence of the House of Representatives and eventual assent by the President.

The President of the Senate Ahmad Lawan congratulated Senator Solomon Adeola for the passage of the bill that he had pursued since the 8th Senate.
Senator Adeola, fondly called Yayi who was elated at the passage of the bill stated that the passage marks a fulfilment of one of his legislative agenda in relation to institutional development of education at all levels, adding that Federal Polytechnic, Ilaro already have enough facilities for the upgrade to take off immediately without much expenditure as would have been required for a brand-new university.

Recall, the Federal Polytechnic, Ilaro was established by Decree No. 33 of July 25, 1979. The Polytechnic opened to students on November 15, 1979 on a temporary site provided by its host community, the ancient town of Ilaro, Ogun State. The first site of the Polytechnic was the compound of the Anglican Grammar School, Ilaro about half a kilometre from Ilaro township junction.

The Polytechnic was on this temporary site till 1983 when it moved to its permanent site along Ilaro/Oja-Odan Road, about three kilometres from Ilaro Township. It is alos about 60 kilometers from Idiroko, a Nigerian Border town with Benin Republic. Ilaro town itself is an ancient town, land locked between Lagos and Abeokuta, the capital of Ogun State. The polytechnic occupies a total of 898.116 hectares land area on its permanent site.

Access to Ilaro and indeed the polytechnic can be gained from Abeokuta through Abeokuta-Lagos Road via Papalanto (22 km) or through Abeokuta-Ibese (10km), from Lagos through Sango-Ota-Idiroko Road via Owode (15km) and from Sagamu through Sagamu-Obele Road via Papalanto. The location of the Federal Polytechnic, Ilaro makes for easy access of road traffic. There is a railway station in Ilaro township.

Both campuses are linked internally with motorable tarred roads provided with street lights and sidewalks for pedestrians. Buildings are connected by pedestrian walkways and well-grassed lawns with beautiful landscaping car packs are provided in strategic areas within the campuses. The area currently occupied physically by the Polytechnic is a small proportion of the entire land area it has; thus, there is room for expansion.

The maintenance and general sanitation standards are good. The polytechnic’s work & services department with full complement of qualified technical personnel and Sanitary Inspection Officer is still coping efficiently with the proper and routine maintenance of buildings, roads, vehicles and electrical installations and appliances. There are adequate facilities for dislodging septic tanks and soak-away pits and the solid wastes disposal arrangement is satisfactory.

The Polytechnic has a team of trained security personnel and controlled access at all entrances with lockable gates. The institution’s Fire Service with Fire extinguishers and sand buckets are available at strategic places on the campus in case of fire outbreak. Indeed, the polytechnic enjoys an appreciable level of security and safety.

As backup, the Polytechnic maintains an insurance policy with NICON, IGI, etc. for security of its assets.