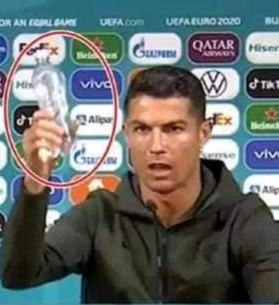 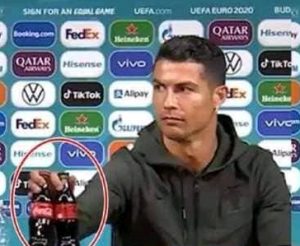 Cristiano Ronaldo was unimpressed with the Coca Cola bottles in front of him before his press conference in the night of Monday, June 14, 2021 and did what many would have been afraid of doing.

The press conference was held in preparation of Portugal’s first game of their Euro title defence vs Hungary in the evening of Tuesday, June, 2021 evening and when Ronaldo arrived, he stared at the bottles for a few seconds and then picked them up and put them aside.
Simultaneously, Ronaldo picked up a bottle of water and raised it up in approval, saying that water was just better.

The move went in line with comments the Portuguese captain made not long ago.

He had revealed his dislike for soft drinks then, and said that although his son took them, he knew that he, Ronaldo, was never happy with them.

Ronaldo’s actions, though, is a slap in the face of Coca Cola company. To have a top athlete like Ronaldo, the most followed person on social media disapprove of your product in a world stage doesn’t make for good marketing promotions.
It remains to be seen if UEFA will punish Ronaldo but that is very unlikely. 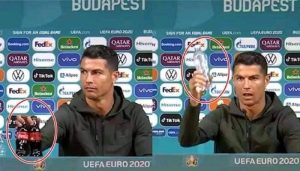