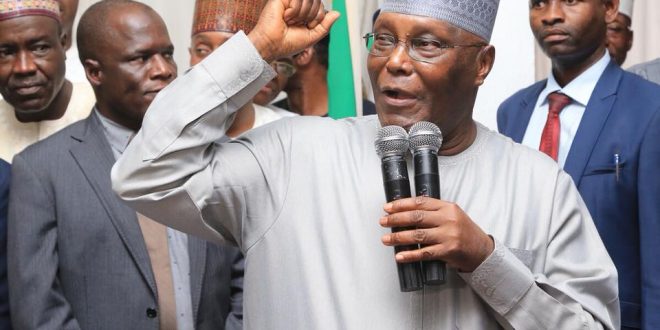 Why Presidential Election Result Is Not Acceptable – PDP

Idowu Hamed February 27, 2019 NEWS Comments Off on Why Presidential Election Result Is Not Acceptable – PDP 84 Views 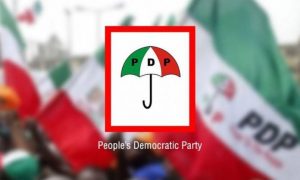 The People’s Democratic Party (PDP) on Wednesday February 27, 2019 refused to sign the result sheet of the Presidential election which was announced by the Independent National Electoral Commission (INEC) in Abuja.

INEC declared President Muhammadu Buhari of the All Progressives Congress (APC) re-elected haven won the highest votes of 15,191, 847 votes to defeat his closest rival, Atiku Abubakar, of the PDP who polled 11,262,978 votes.

Buhari won in 19 states while Atiku won in 17 states and the Federal Capital Territory.

The News Agency of Nigeria (NAN) reports that the PDP Agent, Mr. Osita Chidoka, left the hall at the National Collation Centre when the INEC Chairman, Prof. Mahmood Yakubu, started calling on party agents to come forward to sign the result sheet.

Chidoka, who was a former Minister of Aviation, in an interview with journalists on his way out said that the party does not accept the election result as representing the valid votes of Nigerians, due to three issues it earlier raised by the party.

He said that the party that expected INEC would have projected the result of what the Smart Card Readers card readers used for accreditation of voters.

“The second one is the issues we raised about the number of registered vis-à-vis if what the chairman now calls collated voters means that 1.6 million people are missing in the voter register.

“We think that the issue is substantial enough to require a resolution.

“We also believed that difference between the accredited voters and the total votes cast which came to about 750,000 votes, requires an issue to be looked at.

“Finally, we believe that INEC needs to look at the cancellations that took place in the election impacting 2.7 million.

“So, in our view, this election needs to looked at again and possibly we would have had a re-run, more importantly.

“We think that INEC should have looked consciously to the use of the card reader, the absence of card reader is a major violation in the elections, it renders that election null and void, and that is what the chairman promised us.

“So, for us in the PDP, we believe that this is a new law in Nigeria’s electoral history.’’

“We want them to remnants peaceful, we will explore all our options, including the believe that the legal process in Nigeria is one of the way to resolve issues.’’

Chidoka had earlier raise a concern about the not usage of card readers for the election in some places, while calling on INEC to provide the details of number of accredited voters with card readers.

He also expressed concern in disparity in the number of registered voters for states, while also calling on INEC to restore votes of the party alleged to have been cancelled.

Meanwhile, Yakubu, responding before the announcement of the result said that the difference in the valid votes and cancellation were insignificant to impact on the general outcome of the election.

He said that observations raised party agents PDP would be useful for the future, elections, including those of 2023.

Yakubu said that while the commission notice the figures of accredited voters in relation to the vote cast were not adding up in one or two instances, preliminary investigation revealed the disparity cumulatively was actually less than two per cent.

“Secondly, we also very strongly believe that the wide spread incidents of ballot box snatching, particularly in many areas after voting means that you have data on the smart card reader but not backed up by actual ballot because the ballot was either hijacked, burnt down or destroyed.

“Therefore the information on the smart card reader is slightly to be higher than the actual ballot, meaning the vote cast but this is only by way of preliminary investigation.

“Yes, we believed that there have been cancellations; however in the case of presidential election the cancellations do not affected the conclusion of the process. ‘’

Yakubu added that disparity in the figure of did not also affect the total number of thousands who voted in the election, as they are well below the number of PVCs collected.

“The voter turnout for the 2019 general elections from the analysis we just concluded is 35.66 per cent.’’

Tags Why Presidential Election Result Is Not Acceptable - PDP#