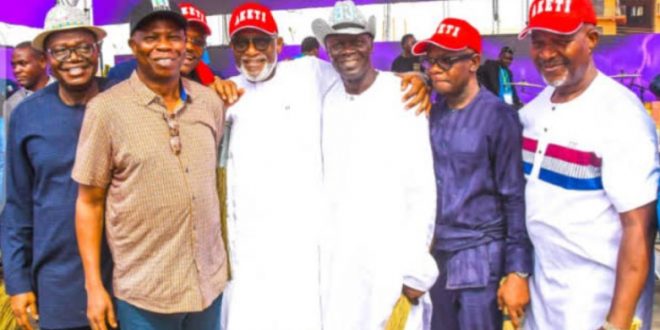 Governor Akeredolu (3rd left) being flanked by the defectors

Why Former Deputy Governor of Ondo State, 13 Others Dump PDP For APC

AKURE: It’s no longer news that the former Deputy Governor of Ondo State, Alhaji Lasisi Oluboyo and 13 other chieftains of the Peoples Democratic Party (PDP) recently defected to the All Progressives Congress (APC), but Alhaji Oluboyo described Governor Oluwarotimi Akeredolu as a man of integrity and straightforwardness that could be trusted.

The former PDP chieftain defected to the ruling APC alongside an estimated 10,000 of their supporters at the rally marking the 3rd anniversary of Akeredolu’s Administration in Akure.

Oluboyo noted that they belief in the leadership of Governor Akeredolu and that he and his members will work with him with sincerity, while he assured the governor that he would add value to APC.

“We believe in leadership of Akeredolu and Adetimehin. Mr Governor, I will work with you with all sincerity,” he said.
Oluboyo and others defectors were received by Mr Ade Adetimehin, the state’s APC Chairman and Governor Akeredolu.

In his speech at the event, Governor Akeredolu said he was glad and promised that all would be treated according to their work in the party.

His words, “With this new calibre of people today coming to APC, it means we are moving forward and I know that Adams Oshiomhole ,our national chairman will be happy as well.

“We don’t discriminate in our party. Mr Bamidele Oleyelogun decamped from Labour Party and he became a speaker of the state House of Assembly.

“And Agboola came from another party and he is today deputy governor.

Welcoming them, Adetimehin said that he was happy about the defection and attributed it to the numerous developmental programmes of the APC administration in the state.

He said that the APC is a progressive party that has endeared itself to the people.

The party chairman said that the state has witnessed tremendous development in industrialisation.

“The last time we had industries in Ondo State was during late Gov. Adekunle Ajasin’s administration but Akeredolu has established no less than four industries in Ore,” he said.

Adetimehin enjoined the decampees to make good inputs in APC, saying that APC did not discriminate but would give them equal treatment.

”It is your work that will determine your positions in APC,” he said.
Minister of State for Niger Delta, Mr Tayo Alasoadura, thanked the people of the state for supporting the administration in the last three years.

Alasoadura noted that the administration had done remarkably well and deserves re-election for continuity.

Agboola Ajayi, the state deputy governor, appreciated the support received by the administration, adding that people had really seen light in APC.

Mr. Timehin Adelegbe a member of House of Representatives, representing Ose/Owo Federal Constituency, asked the party faithful to go back to their different wards and work assiduously to ensure victory for the party in the coming governorship election.

Adelegbe promised that his constituency would give 100 per cent vote to APC all the time.

A political guru in Ondo state at the event posited, “The mass defection of PDP stalwarts to APC in Ondo state Is indeed Akelicious”.