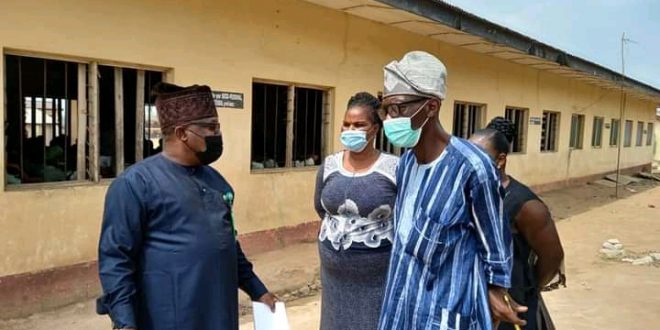 SAGAMU – The Commissioner III in the Ogun State Teaching Service Commission, who also doubled as the Chairman Promotion Exercise in Remo Division of the State, Hon. Majekodunmi Olarenwaju has said that educational sector in the State would further witness great development, following the approval of backlog promotion of 2018, 2019, and 2020 exercise by the governor, Prince Dapo Abiodun.

Olarenwaju made this known during a promotion exercise for Teaching and Non-Teaching Staff of the Commission, held at Remo Secondary School in Sagamu.

“Indeed, this promotion will bring about rapid development to the educational sector in the State, as both Teachers and Non-Teachers in the sector will be promoted in the course of their careers, it will also motivate and encourage them to give our students good and qualitative education across the State,” Olarenwaju said.

He stated further that there was no reason would any good government owes his workforce, especially the Teachers who were major stakeholders in educational sector of the country, noting that the step of promoting them was a prove to the fact that the present administration being led by Prince Dapo Abiodun is a Teacher’s loving Governor, compare to the immediate past administration.

On the performance of Teachers, Olarenwaju opined that the State was blessed with brilliant and hard-working Teaching and Non-Teaching Staff, adding that they were all performing excellently well in the promotion exercise.

He expressed satisfaction in the process of the promotion exercise, stressing that the Higher Educational Potential (HEP) of the students would be greatly improved with the level of intelligence and outstanding performances displayed by the Teachers during the interview exercise.

Speaking with newsmen, Mrs. Abike Adeoye and Mrs. Akinsola Adeyemi, whom were of Ijebu-Ode Grammar School Teachers hailed the State government for its generosity towards teaching profession, assuring that they would work harder to improve the academic performances of their Students.