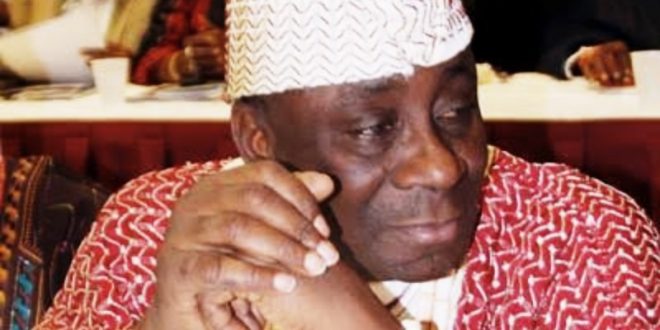 In a two-hour judgment, Candide-Johnson held that considering the totality of the evidence before the court, Akiolu had a rightful claim to the throne.

His words, “The claimants alleged that the Solanke Tribunal submitted a Report in 1976 stated that the Obaship stool is by rotation. None of the claimants produced a copy of the report in court.

“The claimants failed to provide concrete or credible evidence of the alleged rotation of the two ruling houses.

“The claimants claimed the Akiolu branch of the Ologun Kutere line has gone into extinction. The third defendant (Akiolu) in his evidence was able to trace the lineage of his stool.

“The evidence of the claimant’s witnesses were full of contradictions. From the totality of the evidence before the court, I hereby pronounce His Royal Majesty Oba Rilwan Akiolu, is the valid legitimate Oba of Lagos.

“The case of the claimants is hereby dismissed.”

Candide-Johnson also noted that it had been 233 to 239-years since a lineage of Oba Akinsemoyin has been able to become Oba of Lagos.
“For 200-years all the Obas of Lagos trace their lineage to Oba Ado and not Akinsemoyin.

“A burden of the the Akinsemoyin descendants has been to succeed the throne of the Oba of Lagos and this suit is reflective of that,” he said.
Candide-Johnson also noted that his court had no original jurisdiction to hear the suit and that the case should have been heard like a similar suit was heard in the 1975 Solanke Commission of Enquiry and 1978 Kazeem Commission of Enquiry.

The judge invalidated the claimant’s claim of an alleged customary 90-day waiting period before a new Oba can be enthroned after the demise of the former Oba which they alleged was not practiced during Akiolu’s enthronement.

“I hold that the customs and traditions represent the legal, credible customary law of succession to the throne of the Oba of Lagos.

“In his evidence, Oba Akiolu eloquently quoted and gave examples of three previous Obas who were installed as Obas with no 90-day rule.

“The 90-day waiting period is not the custom of the people of Lagos and not a binding rule in the installation of the Oba of Lagos.

“The claimants have failed to prove the authenticity of the 90-day rule,” Candide-Johnson said.

NAN reports that Prince Adedoyin Adebiyi and Prince Rasheed Modile, both of the Akinsemoyin Ruling House of Lagos had on May 30, 2003 challenged the Akiolu’s claim to the throne.

Adebiyi and Modile were candidates chosen by the Akinsemoyin Ruling House to contest the throne of Lagos in 2003 after the demise of Oba Adeyinka Oyekan, in March 7, 2003.

They lost the race to Akiolu, who they alleged had no rightful claim to the throne.

Joined in the suit as respondents were the state governor and the then Attorney-General of Lagos State, Prince Awobade Pearse.

Others are the representative of the Ologun Kutere Ruling House and Chief J.J. Junaid-Eko and the head of the traditional white cap chiefs of Lagos.

Other respondents include Prince Kola Balogun and Mr Musibau Kelani, who are the respectively the Head and Secretary of the Eshilokun Royal Family.

During the trial, three witnesses testified for the claimants while four witnesses including Akiolu testified on behalf of the respondents.

While giving evidence during the trial on May 22, 2017, Akiolu accompanied by 10 white cap chiefs had said that he was the rightful king of lagos.

“I am here to justify my appointment, you cannot build something on nothing, it will be broken.

“By native law and customs and by law, I am the bona fide Oba of Lagos,”
“Despite the letter from Lagos State Government confirming my appointment as Oba and stating that I am from the Akiolu royal family, I want to make it clear that a royal family and ruling house means the same thing.

“My appointment as the king is the first time in history that kingmakers will be unanimous in selecting an Oba of Lagos.”

During his testimony on July 11, 2017, a kingmaker and the Olumegbon of Lagos, the late Chief Fatai Olumegbon had told the court that Akiolu was chosen by Ifa, the gods of divination.

“All the envelopes containing the names of the applicants as received were sent for Ifa divination and one by one, the names were screened.

“When the name containing Akiolu’s name was done, they shouted ‘ejiogbe’, that is, this is the man that will rule well and bring the desired changes.

“Apart from that, Akiolu was the first Oba unanimously selected by all the six kingmakers, in fact, he scored 6-0.” Olumegbon had said.