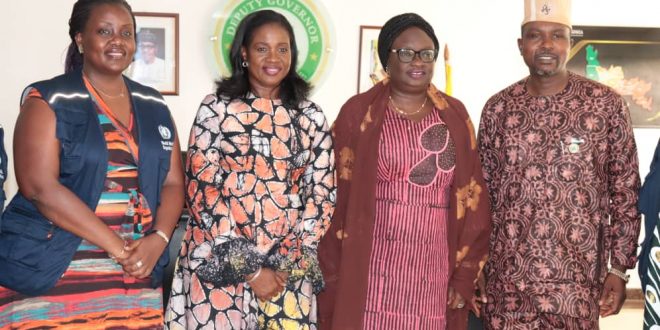 ABEOKUTA: The World Health Organisation (WHO) has declared the 40 people, who had contact with the COVID-19 index case in Ogun State, virus free and would be released from quarantine shortly.

According to a press release e-signed and made available to StarTrend Int’l magazine & www.startrendinternational.com by Oluwaseun Boye, Head, Ogun Deputy Gov Media: Dr. Braka Fiona, the Officer in Charge, WHO Nigeria, made this known when she led her team, in company of the State Commissioner for Health, Dr. Tomi Coker, to the State Deputy Governor, Engr. Noimot Salako-Oyedele in Abeokuta.

Dr. Fiona said the contacts had no detection of symptoms related to the virus, while encouraging the State Government to implement the Incident Action Plan (IAP), as it was a comprehensive approach that would assess the preparedness aspect, risk communication, surveillance and point of entries across the State, in order to prevent massive outbreak.

“The likelihood that another case may come in, is there and we need to ensure that the borders are not porous, as Ogun state shares an international border, thus making it the gateway to passengers travelling through the rest of the country.  So we need to encourage that the plan and guidelines are well implemented and articulated,” she said.

While commending the State Government for putting machineries in place and its response strategy, since the index case was identified, Fiona appreciated the leadership of the State Ministry of Health for keeping tab with international communities and ensuring that health workers were on alert to detect any cases.

She advised members of the public to be highly suspicious, be vigilant and report all suspected cases to the appropriate authorities, as well as heed instructions on personal hygiene and contact.

Responding, the Deputy Governor, Engr. Noimot Salako-Oyedele expressed delight that the 40 contacts with the index case were virus free, saying the outbreak of the virus on February 27, 2020, generated panic across the State.

She appreciated those who worked tirelessly to contain the initial spread of the virus, assuring that government was committed to the implementation of the IAP.

Earlier in her remarks, the Commissioner for Health, Dr. Tomi Coker, acknowledged WHO’s support, saying ‘’when the State woke up to the announcement of the virus on February 27, within a few hours, WHO came on board to support the State’’.

Dr. Coker added that, machineries had been put in place to ensure speedy response, in line with international guidelines, as the 14th day expiry date for quarantine approaches.

According to her, “WHO provided us with written materials and also financial support to produce our Information, Education and Communication (IEC), as well as Infection, Prevention and Control (IPC). They increased our capacity by training us with IPC and going into the communities with us to sensitize them, as well as deploy trainings down to local governments by inviting their Medical Officers of Health (MOHs); so with their support, we now have rapid response team in every single local government across the State.

“We deployed mobile apps to facilitate dissemination of information to our health workers in the front line. They have been to our isolation centres and have approved the design and within the next week, we will be concluding on that, as well as the checklist on the kind of equipment needed at the isolation centres”.

She assured that efforts would be geared towards continued surveillance and effective communication in raising more awareness across schools, as well as other relevant sectors in the State, saying the IAP had been prepared and forwarded to Governor Abiodun for implementation.

The Commissioner revealed that as of the night of March 12, 2020, the 40 contacts of the index case had been cleared of Coronavirus, as all results proved negative.