Breaking News
Home / HEADLINE / WHEN YOU SERVE THE PEOPLE, YOU HONOUR GOD, SAYS OSINBAJO AT GOV UZODINMA’S ONE YEAR ANNIVERSARY 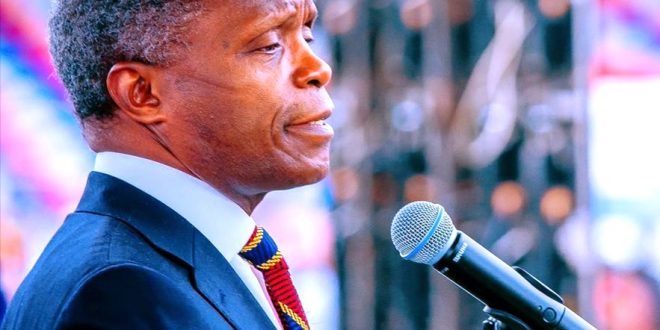 WHEN YOU SERVE THE PEOPLE, YOU HONOUR GOD, SAYS OSINBAJO AT GOV UZODINMA’S ONE YEAR ANNIVERSARY

Idowu Hamed March 15, 2021 HEADLINE, NEWS, POLITICS Comments Off on WHEN YOU SERVE THE PEOPLE, YOU HONOUR GOD, SAYS OSINBAJO AT GOV UZODINMA’S ONE YEAR ANNIVERSARY 19 Views 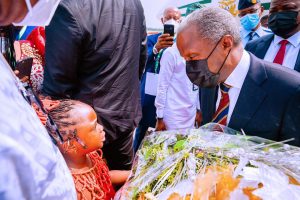 OWERRI – Vice President Yemi Osinbajo, SAN, has said the challenges Nigeria currently faces as a nation are not insurmountable, but they are stepping stones to a great future.

According to a release e-signed and made available to StarTrend Int’l & online – www.startrendinternational.com by Laolu Akande, Senior Special Assistant to the President on Media & Publicity, Office of the Vice President, Osinbajo stated this on Sunday, March 14, 2021 in Owerri at a special interdenominational thanksgiving service to mark the first anniversary of the administration of the Imo State Governor Hope Uzodinma.

The Vice President, who delivered the felicitations of President Muhammadu Buhari to the Imo State governor and the people, also observed that faithful service to the people in public office is a way of honouring God who gave the opportunity in the first place to leaders. 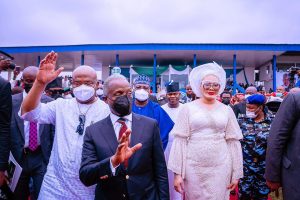 “Let me say that despite the challenges our Nation faces, by the grace of God, we, the Nigerian people, are more than able to surmount them. So I say to you, people of Imo and the great people of Nigeria; yes, we have work to do, yes we have much to repair, but we are undaunted. The problems we see today are the stepping stones to our great future. We are, by the grace of God, mightier than our challenges,” the VP said.

The Vice President was received at the airport by host Governor Uzodinma, as well as some former Governors – including Orji Kalu of Abia and Mohammed Bindow of Adamawa. There was also FEC members like Attorney General of the Federation, Abubakar Malami, SAN, and the Minister of Labour and Employment, Chris Ngige.

While he acknowledged some of the strides so far recorded under Governor Uzodinma, the VP urged the him to stay focused on delivering quality leadership in service to the people of Imo State, while ensuring their well-being remains a cardinal point for the state government. 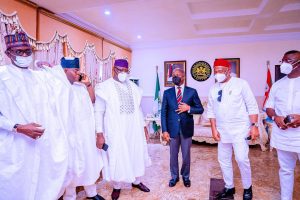 “There are at least three possible forms of opposition to government. One is political opposition, the second is time, and the third is the leader himself – i.e. when the leader is discouraged or distracted. But the most critical factor is you, the leader. How you deal with time and political opposition will determine success or failure. Don’t look back. Keep focused. Stay on track,” he said.

“Some may say that you are here because you are the smartest, I am sure you know that being the smartest doesn’t mean you will get here.
Referencing the Holy Book, the VP noted that, “Time and chance happens to them all. And the Almighty God controls Time and chance. So you are here today by the Grace of God. And so, my brother, life is a loan and public office is a loan of even shorter tenor.” 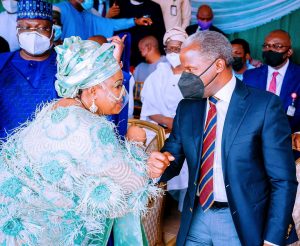 He added, “Morning shows the day, and you have started well. I am aware that over the past year, your administration has invested extensively in construction and rehabilitation of physical infrastructure, the rehabilitation of educational and health institutions, as well as markets.

“The administration is currently undertaking a number of measures aimed at restoring power supply to rural communities and increasing power supply to urban areas. I know that you have also issued an executive order reducing the right of way charges for telecoms companies laying broadband infrastructure – which bodes well for the use of technology and emergence of an innovation economy in this state.

“I understand that these are only a few of the initiatives that this administration is undertaking. I am told that this year’s budget has been tagged a “budget of wealth creation.” This theme is apt because we recognize that our major challenge as a nation is that of creating enough wealth and opportunities to meet the expectations of our fast growing population. The theme also gives an insight into your focus and orientation.” 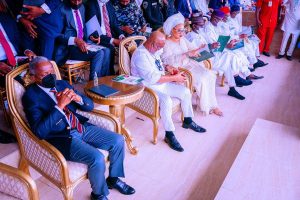 Prof. Osinbajo then wished Gov. Uzodinma administration good success in piloting the affairs of the State in the years to come.

The service, which featured ministrations from Catholic, Anglican, Methodist and Pentecostal clergy, also had in attendance the Senate President, Ahmad Lawan and Deputy Senate President, Ovie Omo-Agege; Deputy Speaker of the House of Representatives, Ahmed Wase; and a coterie of State Governors – including Alhaji Mai Mala Buni of Yobe State, who is also the APC Caretaker Committee Chairman. Others include Governor of Ekiti State and Chairman, Nigeria’s Governors Forum, Dr. Kayode Fayemi; Governor of Lagos State, Mr. Babajide Sanwo-Olu; Governor of Ebonyi State, Engr. Dave Umahi; and Governor Yahaya Bello of Kogi, among others.

Publisher and Editor in Chief - Magazine and Online Tel: 08038525526 - 08023339764 - 08055657329 Email: startrendinter@gmail.com
Previous FIRSTBANK PROMOTES CROSS BORDER PAYMENTS IN SUB SAHARA AFRICA WITH FIRST GLOBAL TRANSFER
Next FG To Spend Half A Percent Of GDP On Research, Innovation, Buhari Commends Nigerian Scientists, Researchers, Others For Rising Up To Challenges…