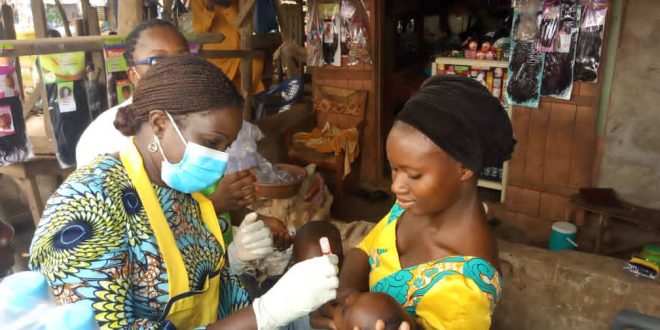 Dr. Tomi Coker (L), immunizing a child against Polio disease outbreak in the State, while mother of the child looking on.

OJA-ODAN – Ogun State Government has said it is committed to sustaining the eradication of Wild Polio Virus (WPV) and interruption of the Circulating Vaccine Derived Polio Virus in border towns and the State at large.

To this end, the Commissioner for Health, Dr. Tomi Coker assured the public that no outbreak of polio would be recorded in communities across the State, as it has begun the December round of Outbreak Response Exercise in Yewa North and Imeko/Afon Local Government Areas.
Coker stated this, during a monitoring exercise to Oja-Odan town in Yewa North Local Government Area of the State, noting that it was a mop up exercise to immunise children against the virus.

“Why we came out is because there is an outbreak of Circulating Vaccine Derived Polio Virus in Benin Republic, a neighbouring country and we want to ensure that our children here do not catch it. This is a mop up exercise to ensure that children are immunised. We have gone to market to sensitise parents and caregivers to avail their children the opportunity of being vaccinated against the crippling virus”, Coker said.

Also speaking, the Executive Secretary, Primary Health Care Development Board, Dr. Elijah Ogunsola noted that the exercise which kick-started from December 12, 2020 would end on December 15, 2020, while Oral Polio Vaccine would be administered to children of zero to 59 months in the affected Local Governments.

He urged parents and caregivers to inform others who are yet to get their children and wards immunised to do so.

Dr. Ogunsola said that transit teams would move from house to house, while others would be at designated fixed posts, such as market places, schools and religious houses, enjoining all to support the State, in its efforts to ensure the wellbeing of children, by bringing them out for vaccination.

Speaking on behalf of the indigenes, Mrs. Kabirat Ogunsona and Christy Abel lauded the initiative and timely response of government to prevent outbreak, due to the proximity of the State to Benin Republic, promising to inform other parents and caregivers to get their children and wards vaccinated, while the exercise lasted.