Breaking News
Home / HEADLINE / We Are Also Disappointed In You, Ogun Doctors Fire Back At Gov. Abiodun 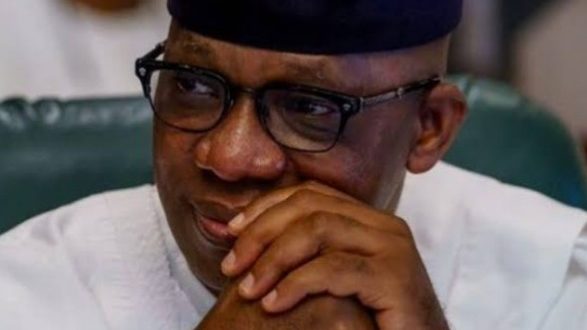 We Are Also Disappointed In You, Ogun Doctors Fire Back At Gov. Abiodun

Idowu Hamed June 3, 2020 HEADLINE, NEWS Comments Off on We Are Also Disappointed In You, Ogun Doctors Fire Back At Gov. Abiodun 46 Views

ABEOKUTA: Raging war between the Nigeria Medical Association in Ogun state and Governor Dapo Abiodun seems to have just started as the group also fired back at the governor, saying they are also disappointed and ashamed over the comment made by the state governor, on their demand for increase in their salaries.

It will be recalled that Governor Abiodun in his recent speech while addressing newsmen described the strike embarked upon by the resident doctors of Olabisi Onabanjo University Teaching Hospital, Ago-Iwoye as irresponsible and politically motivated.

But, in their response to Gov. Abiodun’s tongue lashes, the doctors on Monday, June 1, 2020 expressed their dissatisfaction over the governor’s comment.

According to the NMA chairman, Dr. Ismail Lawal who spoke on behalf of the doctors said the group is ashamed with the comment made by the governor.

The Medical personnel noted that it s annoying and aching that political leaders are making doctors beg for what supposed to be their rights.
He stressed that the resources of the state belong to everyone and must be channeled towards taking care of the need of the people in the state.

His words, “At our level, I believe that any doctor that has passed through medical school for minimum of six years to get NBBS and NTBH, that person should have something upstairs to offer.

“But it’s unbecoming of political officers to just see you asking for your rights as if they are doing you a favour.”

The NMA chairman however urged Governor Abiodun to implement the recommendations of a committee set up by him to look into the crisis at the OOUTH.

Dr. Lawal added, “Sincerely speaking the issues of association of Residents Doctors, OOUTH, these are people requesting for their rights have been lingering and has predated the era of Prince Dapo Abiodun.

“And I am very sure that if you are to face the issue truly, the Governor met them on industrial action when he came in as governor, and the fact is that in other to honour him, the action was suspended that time.

“That was what led to establishment of formation of fact finding committee that was sent to OOUTH and I am very sure the committee should have finished it’s work and submitted a report.

“The most respectable thing I expect the governor to have done is to look at that report and implement it because it comprises brains which I believe he himself can trust with what they will come up with before asking them to embark on it.”

Recall, Governor Abiodun also in his address to the media on the doctor’s crisis in Ogun state accused the Medical professionals of being used by some politicians in the state to create wrong impression about his government.

In the video, the visibly angry Ogun State helmsman who noted that the doctors’ demand might have political inclinations, chastised the medical practitioners, saying they should be more concerned about people’s welfare than clamouring for money.

His words on the the video, “I find it difficult to believe that when we are all putting our thinking caps on, trying to figure out what to do and how to do it, any set of people will be irresponsibly requesting for a wage increase. And these set of people are people that we have entrusted out health to at a point like this. I am very disappointed, I think, that is what I will say for now.

“I am beginning to wonder and it is being speculated that this may actually have political inclinations, these people may be politically sponsored. I am yet to believe it, but at this point in time, anything is believable.

“If you see people who are educated, people who went to medical school, people who graduated, whose charge is to look after people, that is what they are charged for; that is what should be paramount to them not money, and we have done our best.”

However, some Nigerians who commented on the video clip were of the opinion that the governor should have adopted the part of patience and distance himself from the use of such language he used on the viral video.

They say doctors are professionals that no one can’t do without, even when they are demanding for crazy requests, “one needs to play along with them, rather than taking them to the cleaner as done by the governor.”

Ogun Doctors Fire Back At Gov. Abiodun# We Are Also Disappointed In You 2020-06-03
Idowu Hamed

Tags Ogun Doctors Fire Back At Gov. Abiodun# We Are Also Disappointed In You