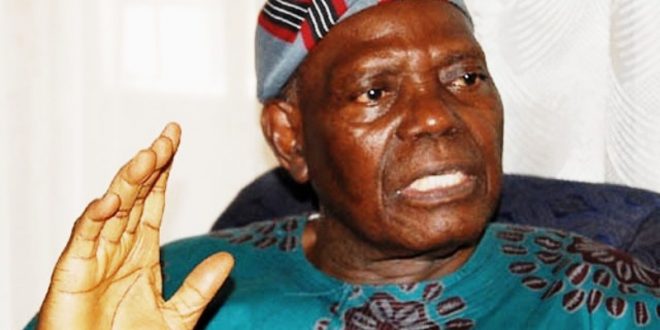 OSUN STATE: I feel shocked, sad and shattered to learn about the sudden death of Senator Mojisoluwa Akinfenwa – a longtime friend of mine since the formation of the Awolowo’s Unity Party of Nigeria (UPN). Akinfenwa, among others, led the UPN into victory in Ijesaland.

Akinfenwa and I first met as members of the old Oyo State Executive Committee of the Unity Party of Nigeria (UPN) in January 1979 and, later, we became close friends within the Cabinet of Chief Bola Ige’s government of Oyo State formed in October of that year. He was a most hard working Commissioner for Education in the old Oyo State. Since then, the bond of our friendship has been very strong at each other’s family level.

Sometimes towards end of February 1984, just a few weeks after my temporary release from Kirikiri prison, I went to check on Mr Akinfenwa at No 33 Rotimi Williams Avenue, Bodija in Ibadan and met him with some pains. He put one of his ankles in bandages. I was seated with him to share from his discomforts when some secret security agents came to invite him to report at the police headquarters. I suspected an arrest and subsequent military detention when they felt no concern about the pains in his ankle. I was sad. I did not immediately know that the other Oyo State commissioners too were being fished out from their different homes. However, it was going to be for a short time like mine, I concluded. And I said so to Bola, his wife, for consolations.

It was not until when I was re-arrested in white safari suit, kept in a pond of dirt for three nights at the Army barracks, Mokola and being taken for detention at the NSO headquarters in Eleiyele on Monday, April 2, 1984 that I again saw Senator Akinfenwa among other commissioners being detained in my old official quarters at No 754 Links Reservation as my captors drove there to parade me to them in wicked humiliation.

When I later joined them in Agodi Prison on Friday 27th April, 1984 Akinfenwa demonstrated very deep brotherly love to me throughout our staying together in the awaiting trial cells – particularly in August and September 1984 during my trial at the Ibadan Special Military Tribunal. He nearly became sick for sadness around 16th October when I was sentenced to 44 years imprisonment.

He volunteered to give evidence on my behalf because the tribunal chairman, Brigadier Ndiomu was his old school friend. While I had been separated from him and transferred to convicted prisoners cell, he must have been released towards the end of 1985. He began doing his best to make life comfortable for me for the rest of my stay in prison.

Unknown to him that I would be released on 16th August, 1986, trying to cultivate Agodi prison’s friendship for my sake, he took the Prison senior officers out for dinner on 15th August, 1986. During the thirty days of Bola Ige’s release before my release, he was constantly picking quarrels openly with Uncle Bola and Sir Dele Ige accusing them of complacency about getting me out of prison. He showed absolute friendship and love towards me and expressed disappointment that I was released to my lawyer instead of waiting for him to be the one driving me out of Agodi prison. We later became great family friends.

He, among others, worked with me thereafter to build Afenifere which metamorphosed into NADECO in Osun state during the dangerous Abacha military era.

As the Osun state chairman of Afenifere, I remember with admirable pleasure, that only Senator Akinfenwa stood by me amongst the Vice chairmen of Afenifere in Osun state when the battle to form the Alliance for Democracy (AD) became the only practical option at Abuja on 8th September, 1998. He later got elected as an AD senator of the National Assembly in 1999.

Senator Akinfenwa met me recently in my home at Ila Orangun. He was looking healthy and radiant. We were happy together and reminisced about many aspects of our relationship – including our recent ugly duel on AD national championship and we jested and laughed at each other. I did not suspect it was going to be our last meeting.

May Senator Akinfenwa’s soul find solace in the bossom of our Lord God as I pray that all of us – his friends, social and political colleagues and family, shall have the fortitude to bear his loss.
Adieu, Senator Mojisoluwa Akinfenwa, my dear friend.

*Chief Bisi Akande sent in this from his Ila Orangun residence in Osun State.