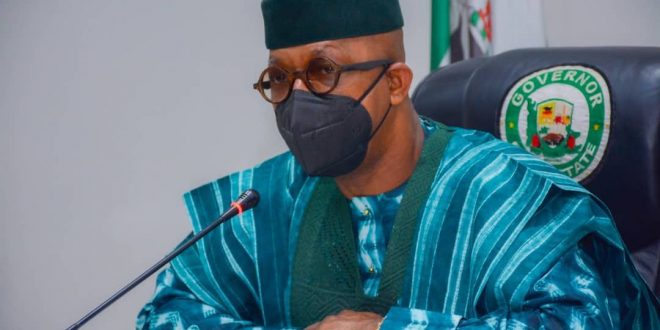 Abiodun, in a statement by his Chief Press Secretary, Kunle Somorin, on Wednesday, March 30, 2022 described the attack on the passenger train as tragic and barbaric.

He said the incident, which occured on Monday, March 28, 2022 was not only unfortunate, but disheartening, particularly when President Muhammadu Buhari-led administration is rebuilding railway infrastructure, which had been moribund over the years.

Abiodun, who expressed sadness over the deadly attack, said bandits and terrorists are now turning on critical infrastructure when they have been smoked out from their hideouts in the forests.

While commending the Buhari-led FG for carrying the battle to the bandits, noted that efforts must be intensified by the security agencies to ensure the bandits have no breathing space.

The governor, however, hailed his Kaduna State counterpart, Mallam Nasir El-Rufai, for his stance against banditry and all forms of insecurity in the state, urging him not be discouraged by the latest attack.

Abiodun further condoled with the families of the victims of the attack, praying God to give them succour and heal their pains.

He also prayed for the departed souls to find repose.

“On behalf of the government and people of Ogun State, I want to express condolence to the FG, the Kaduna State Government and families of victims, over the said incident on Monday. The attack on the Abuja bound train by bandits was nothing, but height of wickedness.

“The innocent souls lost during the attacks were Nigerians going about doing their normal business, the attack was an unfortunate one, especially when many Nigerians now see the revamped train service by President Muhammadu Buhari-led Federal Government as a safe and convenient mode of transportation.

“While I commend the FG on turning the heat on these undesirable elements, which has made them to scamper from their hideouts in the forests, I want to urge our security agencies to intensify efforts to rid the country of these criminals.

“Similarly, I salute the courage of Governor Nasir El-Rufai for standing against banditry and all forms of insecurity in Kaduna State. I want to urge him not to be fazed and discouraged by this latest cowardly attack on innocent citizens.

“I pray that God grant the families of the victims the fortitude to bear the irreparable loss. I also pray the departed souls find repose in the bosom of their Maker”. Abiodun was quoted to have said in the statement.