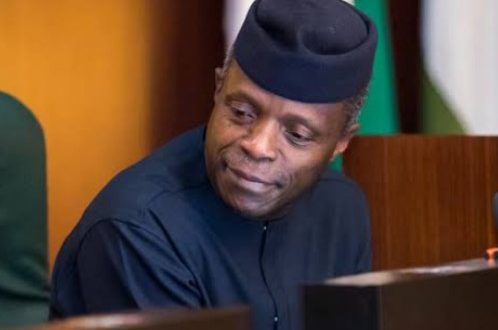 Okafor noted that the purported story is “purely fake news dissemination, intended to mislead or deceive the reading public.”

Read his full statement below:

This is really amusing!

N4billion bribe given to Osibanjo out of Magu’s alleged N39billion loot?

However, if the story was genuine, l don’t mind. But because l know it was grade A “akpuruka” fake news, and poorly and unprofessional concocted, l didn’t even bother to cast a second glance at it.

The Osibanjo l know and who was my lecturer in Unilag, will not, as Vice President, condenscend to accept that kind of bribe that will destroy his integrity, ridicule his exalted position as Vice President of Nigeria and destroy his political career. That one l am very sure of. I am not speaking for him actually.

Even though my brother, Louis Odion is doing his job, a good one at that, as a presidential spokesman, he actually didn’t need to labour too much to dispel that junk story or convince anyone on that trash of a story about the VP, Prof. Osibanjo. Where the story came from is already well known. It is one of those occasional propaganda stunts by the WAILING WAILERS of Nigeria political Reggae club.

Pointblanknews.com is one of those discredited job men online news portal created in 2009/2010 ahead of 2011 general election media rackeeting. It is co-owned by my friend and colleague in PUNCH Newspapers who is based in Philadelphia, USA. They are Doyin Okupe’s 2015 media boys who used their kill-and-chop online to fight Buhari/Osibanjo/APC in 2015. The fake news portal is a pro-Jonathan and pro-PDP fake news medium. I have no quarrel about who it supports, afterall, we can’t have everybody supporting PDP or APC. It’s not good for our democracy. There must be balance. But let the truth prevail, in the public interest and of media credibility.

I believe very strongly that pointblanknews online has a right to ply its trade and it’s propaganda, but it has no right to indulge in fake news dissemination, intended to mislead or deceive the reading public.

As far as l am concerned, if Osibanjo was guilty as alleged, pointblanknews, for God’s sake, should take him to the cleaners. But if the VP was innocent, as l know he is, pointblanknews should simply close shop.

I have observed that pointblanknews only cones on board when election is approaching or when there is anti-APC government or anti-Buhari or anti-Osinbajo, etc, fake news to carry. Let them carry factual news, whether against or for, that’s good journalism.

It puts me off having such news item by pointblanknews.com on this respected platform. BusinessHallmarkExclusive is not just any platform, it is populated by distinguished, eminent, knowledgeable and respected Nigerians, that deserves to be respected and dignified with accurate information that will make them appreciate that they are in the right place. Their sensibilities should never be taken for granted by online mediums like pointblanknews.com