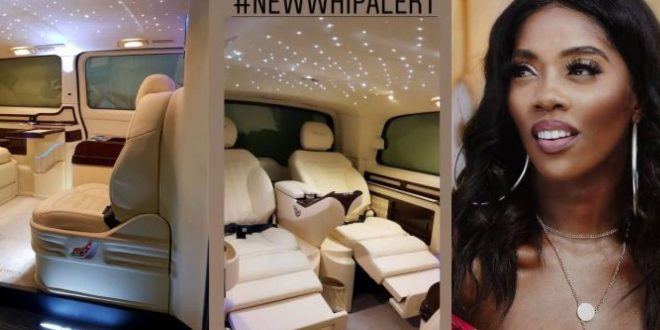 Award-winning music sensation, Tiwa Savage, has entered the second quarter of the year in grand style, as she got for herself a customised exotic car.

The ‘Tiwa’s Vibes’ crooner took to her Instagram stories on Friday to share a photo and series of videos of the latest addition to her garage.

Although she was not explicit on the brand of automobile, it has “Tiwa Savage” clearly inscribed on the seats which suggests how expensive the yet- to –be- identified ride would cost.

Savage, mother of one , who got separated from her hubby Tee Bilz,  in 2018,  came to limelight with the signing of  recording contract with Mavin Records in 2012.

She also signed a management and publishing deal with Jay Z’s Roc Nation in  2016, which she later confirmed via Instagram.

She co-wrote the track “Collard Greens & Cornbread” off Fantasia Barrino’s Grammy-nominated album, ‘Bact to Me.’

Savage was featured on Solar Plexus, a compilation album released by Mavin Records.

It produced the singles “My Darlin”, “African Waist” and “If I Start To Talk.”

She is a recipient of many awards including, MTV Africa Music Award, The Headies Awards, Channel O Music Award, Nigeria Music Video Award and City Peple Entertainment Awards, among others.

In 2018, ace music superstar, Wizkid featured her in the video for his acclaimed song ‘Fever’, in ‘intimate scenes’ which further fueled fans’ speculations of relationship between them.