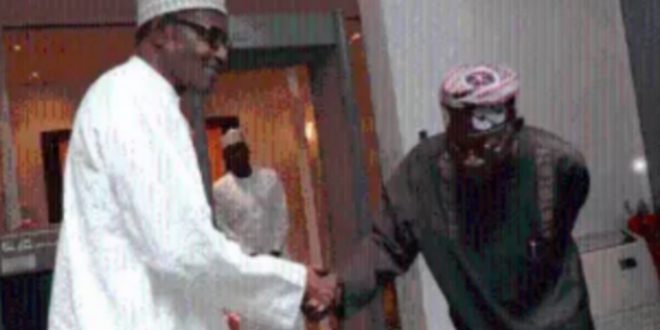 Barely three weeks before the inauguration of President Muhammadu Buhari, for his second term, it appears all is not well with the ruling party politically.

Although, the party has downplayed any tension in the party, President Buhari, on Friday May 10, 2019, hosted Bola Tinubu, the National Leader of the All Progressives Congress, APC, at the Presidential Villa, in Abuja.

Both men, who have rarely been seen together publicly, since the February 23 Presidential election, smiled as they broke their fast together.

Recall, that Buhari was absent at the 11th Bola Tinubu Colloquium, in Abuja, in March, while the APC National Leader did not join the President when he inaugurated some projects in Lagos State, in April. Although, their Aides have repeatedly dismissed reports of a feud between them.

This would also be their first physical contact since the recent public fall out between Tinubu and the Kaduna State Governor, Nasir El-Rufai.

The war of words took a different dimension when one of the governor’s aide, who refused to be named spoke exclusively with Daily Mail.

He said: “Nigerians know who a drug baron is. Nigerians know who was arrested and convicted of drug peddling in the US some decades ago. The Executive Governor of Kaduna State cannot be a running mate to such a person.”

Tinubu had allegedly tipped the Governor of Kaduna State, as his running mate for the Presidency in 2023, but the Governor has not only turned such a move down, but derided the former Lagos State Governor.

Speaking further, the media aide said Tinubu uses his Media companies to show he is clean, he is not corrupt.

“Who was he before being a Governor? Where did he acquire his wealth? Who has bought Lagos State? Whose company collects revenue for Lagos State, and has brought his protege to head one of the most important Agencies of the Federal Government – Federal Inland Revenue Service, FIRS – to collect revenue for FG? Have you heard the latest? FIRS is now embroiled in corruption, running to tens of billions. Who do you think is collecting the money?”

The source questioned why a respected Governor of Kaduna State, would accept to be such a person’s running mate?

“He is not fit being his running mate. He will not even allow Tinubu to be his running mate, no, it is not possible. The ex-Governor of Lagos State belongs to the dark side of history, and cannot be accorded the same respect like the former Minister of the Federal Capital Territory.”

Tinubu has not helped El-Rufai, he said, adding that: “We are all members of a political party. The same role he plays, even a bad one in APC, is the same role, but excellent one is the Governor playing. How many votes did his Action Congress of Nigeria get in 2015, and how many in 2019? Do you not see his strength and control of Lagos is waning?

“He caused trouble in Oyo State, Ogun, Ekiti, and Ondo States. Did we not lose Oyo completely, and lose Ondo in the Presidential election? What influence are you talking about? Does he even have a role in the APC, apart from imposing a fake name on himself?For those he is recruiting to speak for him, time will tell. They will also know when they have been used, and how not important their landlord is. Thank God he is called Lion of Bourdillon, and not Lagos or South-West, or Nigeria.”

It was gathered that Tinubu has pencilled El-Rufai, a close Ally of President Muhammadu Buhari, as his running mate, as he prepares for the 2023 Presidency, but the Governor sees the former as unfit.

Unconfirmed reports revealed that El-Rufai wants to take a shot at the Presidency himself, and feels 2023 will be the right time, after Buhari.