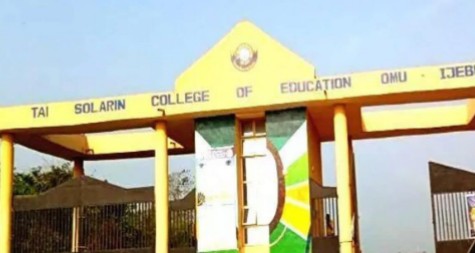 TASCE Staff Declared Missing In Ogun After Plunging Into River

IJEBU-ODE: A staff of Tai Solarin College of Education (TASCE), Omu, Ogun State, Tajudeen Oropo, has been declared missing after his car plunged into a river.

The Federal Road Safety Corps (FRSC), Ogun State Command, confirmed that Oropo’s vehicle plunged into the Ososa River in Ijebu-Ode while travelling on the Sagamu-Ijebu-Ode-Benin Expressway, at about 06:15 pm., on Saturday, September 28, 2019.

Oropo was said to be travelling from Ilaro to Ijebu Ode when the accident occurred.

The FRSC’s spokesperson, Florence Okpe in a statement said the crash occurred when the victim lost control and plunged into the River.

He confirmed: “The man who drove the vehicle is a non-academic staff of the Tail Solarin College of Education (TASCE).”

He added that the corps rescue team and other sister agencies moved in immediately with professional divers to the scene for rescue operations.

Okpe stressed that the ill-fated vehicle, a black coloured Honda Civic with registration number EPE892CV, had been recovered from underneath the river.

“The divers are still working hard to recover the lone passenger in the ‘ill-fated vehicle when the crash occurred.”

“The FRSC Sector Commander Clement Oladele has again advised motorists to drive cautiously especially around bridges and reduce speed to prevent plunging into the rivers.

“The Sector Commander has assured that the rescue operations would not be called off till the man is brought out from the river”, he said.

“The Sector Commander has also engaged the Construction Company, RCC, to ensure that the safety railings around the bridge and other bridges enroute the Sagamu-Ijebu-Ode-Benin Expressway be replaced before the completion of the corridor currently undergoing rehabilitation, to prevent motorists crashing into the River,” Okpe posited.

Publisher and Editor in Chief - Magazine and Online Tel: 08038525526 - 08023339764 - 08055657329 Email: startrendinter@gmail.com
Previous Jaywon Escapes Death As He Allegedly Got Stabbed By Church Security Guards
Next The 10th Anniversary Celebration Of Verve In Lagos (Photos)