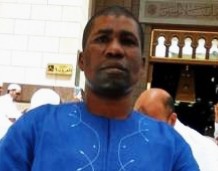 OMU-IJEBU – The Provost, Tai Solarin College of Education (TASCE), Omu-Ijebu, Dr. Lukman Adeola Kiadese has been warned to shun corrupt practices, nepotism, victimizations, favouritism and other related offences, in line with anti-corruption mantra of the present administration, as he was being re-appointed for second term in office.

Chairman, Concerned Academic Staff (CAS), Mr. Ade Balogun stated this in Omu-Ijebu, while congratulating the Provost of the College, Kiadese on his reappointment, noting that accountability and transparency should be his watchwords.

Balogun explained that corruption was not limited to financial crime alone, but included “the little thing you do, or neglect to do in the conduct of your daily schedule of duties, like movement of files, handling mails, giving query letters to some staff and other official documents, among others.

He said that there was need for the entire management and Governing Council of the institution to provide punitive measures for corrupt practices, nepotism, favouritism and victimizations, noting that it was a time to reward staff members for outstanding performances as motivation to them.

“Indeed, we smell the rat that the Provost has alert the staff of the College that he was now on revenge mission, as those that were at loggerheads with him, will be properly dealt with. And he has started it now, because most of our members had been given queries, which really puzzles us”, Balogun said.

“You see, it is time for the government and Governing Council of the institution to call Kiadese to order, and tell him to sheathe the sword, otherwise peace will soon elude the institution again, as he has started victimizing staff that involved in the struggle of salary arrears and payments of our full salaries and outstanding salaries during the last administration”, he said.

He urged the State Government to quickly implement the white paper and reports of Visitation Panel constituted in finding lasting solution to the plights of the staff of the institution headed by Prof. Kamaldeen Balogun, saying that the implementation of this report would make peaceful resolution to the college.