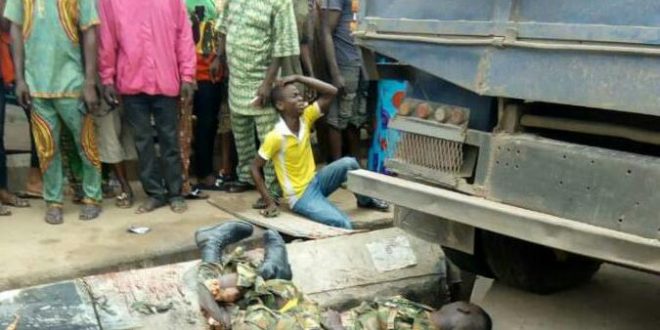 By Raymond Osho
An unidentified soldier has been crushed to death by a trailer in Iyana Mortuary area of Abeokuta, the Ogun State capital on Friday, August 23, 2019.

The granite laden trailer, perceived to have failed break had taken off from Quarry along Ajebo Road, and was heading towards Ijaye area of Abeokuta when the incident happened around 11: 30 am.

Before the unforseen occurrence, the soldier who was riding towards Idi-Aba on his motorcycle had been forced to stop alongside other motorists coming from Ijaye and Sapon in obedience to the traffic light.

People who visited the scene were sorrowful when they saw the uniformed soldier lying down lifelessly in a pool of his blood.

Few minutes after the ugly incident, operatives of the Nigerian Army arrived at the scene in their large number to take the remains of the victim to the mortuary.

The incident led to serious gridlock on the road as motorists had to take one way.

A commercial motorcycle rider in the area who explained the barbaric event on condition of anonymity said the trailer ran into the soldier while he was waiting for the traffic light.

Another eyewitness explained that the the truck driver who jumped down from the truck attempted to escape, but was immediately held by security operatives at the scene. 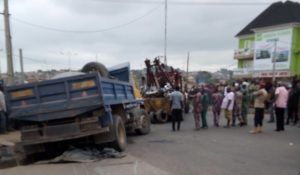 “I think the trailer had failed break. It was coming from Ajebo road and wanted to turn to Leme, but what we saw was that he crushed the soldier who was waiting for the traffic light”, he narrated.

He explained further that “People ran away when the soldiers came. The driver wanted to run but police held him.”