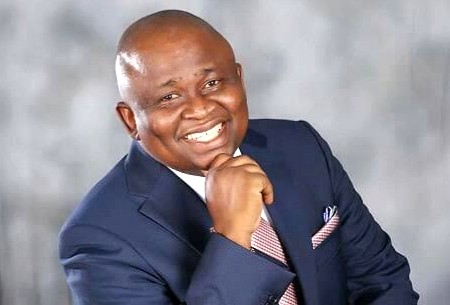 In the history of our nascent democracy since 1999, the legislative arm at all levels, unarguably the bastion of democratic practice, had produced some brilliant legislators whose brilliance shines above the usual coloured perception of “Ghana Must Go Bags”, “Jumbo Salaries” and other such issues derogatorily associated with the parliament at the highest level of National Assembly. While many of the legislators were/are wayfarers or benchwarmers as they are usually known, some have made remarkable progress in all aspects of their legislative duties’ contributory to national development.

One of such trail blazers with imprints from state legislature, through Federal House of Representatives and now the Senate is Senator Solomon Olamilekan Adeola aka Yayi. Since his foray into politics as a rookie representing Alimosho State Constituency 1 at the Lagos State House of Assembly, Adeola has left indelible marks on legislative records of the state and now Nigeria.

At the Lagos Assembly where he was from 2003-2011, he was appointed the Chairman of Finance and Joint Chairman of Appropriation Committees, where he was instrumental to the enactment of the law that strengthened the Lagos State Internal Revenue Service. The legislative reforms then laid the foundation that catapulted the revenue of the state from a paltry N5billion monthly to about N50billion presently! He was also part of the legislative team that passed the Fiscal Responsibility Act and the Public Procurement Act of Lagos State, laws that qualified the state to access developmental funds from international financial organizations.
With outstanding performance in critical financial lawmaking function as well as unprecedented representative function through empowerment in health, education, provision of water and electricity, skill acquisition and other areas it was not surprising that he served two terms and was democratically ‘promoted’ in 2011 to serve in the House of Representatives.

As a member of the House of Representatives, he blazed the trail as a first-time member with his appointment as chairman of the only constitutional committee, the Public Accounts Committee, a position reserved for ranking members. It was here that for the first time this critical committee meant to check unauthorized public expenditure and curb corruption came to the lime light with his activism and his bringing to bear on the job his professional competence in Accounting.  Huge monumental corruption was exposed including the frivolous use of Government fund by the then Minister of Petroleum Resources Dr. Diezani Allison- Madueke to hire private jets for personal trips. She had to get an injunction to prevent investigation by the committee and was saved by the expiration of that House. She was to face her comeuppance later but it was clear from what later transpired in succeeding administration that Adeola, then a Honourable member, was onto something grievous to the nation’s financial health. He blazed the trail in this Committee to check recklessness in government expenditure. In fulfillment of his core function as a legislator, Adeola sponsored and successfully pushed through to passage a bill that repealed the Colonial Audit Act of 1956 and Re-Enact the Audit Act of 2014 on May 22, 2015.

Again, his performance as a legislator earned him a nomination and subsequent winning of the senatorial seat of Lagos West, undoubtedly the largest senatorial district in Nigeria of some over 12 million in the 8th Senate. Despite not being on the side of the winning team of Senator Bukola Saraki to get ‘juicy’ chairmanship position, Adeola soldiered on in cogent contributions to issues at plenary. By mid-term of that Senate a perceptive Senator Saraki realized that, politics aside, the legislative skills of Adeola was not been put to good use.

He initially appointed him to head an Ad Hoc Committee to Investigate Revenue Generation and Misused by MDAs which saw Adeola uncovering humongous amount generated but not remitted and misused. However, it was in his pioneering chairmanship of the Senate Committee on Local Content in the Senate that put back Adeola on his trail blazing ways again. Many got their first education of the role of Local Content in the oil

industry through the activism that Adeola brought to bear on the issue of Local Content laws and how some oil majors were cutting corners to shortchanged Nigerians. Indeed, many oil multinationals came to terms that a new sheriff was in town and had to do the needful of abiding by the Local Content law through patronizing Nigerians and goods that could be sourced in-country instead of bringing all personnel, goods and services from abroad. All this came to the fore in the investigation of the $16billion Egina Deep Sea Projects.

In the ongoing 9th Senate, Adeola has continued in his trail blazing ways. Appointed as the chairman of the critical Senate Committee on Finance, he is in his element in financial engineering for the nation’s at very austere times. He was instrumental in the passage of the 2020-2022 Medium Term Expenditure Framework and Fiscal Strategy Papers (MTEF/FSP) which prefaced and is conditional for all Budgets passage. It assisted in the passage of the 2020 Appropriation Act that now returned the nation’s budget cycle from January to December, a situation unobtainable for over a decade.

Shortly before the 2020 Budget implementation, COVID-19 pandemic struck and the Senator and his Committee were called upon again to work on and assist in passage of a revised MTEF/FSP. He subsequently got the 2021-2023 MTEF/FSP passed achieving the unprecedented record of dealing with three MTEF/FSP in 2 years for what is an annual task. Under him also was the consideration and passage of two Finance Bills to Acts of Parliament in 2020 and 2021. These novel reformist Acts each amended multiple revenue laws to increase revenue and give succor to the under privileged.

But the icing on the cake of his trail blazing legislative dynamism was his novel ongoing investigation into Revenue Remittances of all MDAs in accordance with Fiscal Responsibility Act,2007 and the 1999 Constitution and 1% Stamp Duty on all contracts by MDAs. His motivation for initiating this investigation was the recurrent huge budget deficit that has led the government to huge borrowings. And unlike most legislative probes that yielded no positive results, this one has resulted in as at last count over N500 million paid back in three months to the Treasury of the Government by agencies and contractors that had been illegally spending/withholding revenues and Stamp Duty respectively. The investigation which has so far covered less than a third of the over 700 MDAs promises to bring in more money for government as acknowledged by the Minister of Finance Hajia Zainab Ahmed when she appeared before the committee.

Another spin off from this result-oriented investigation is the issue of some MDAs opting out of the Budget completely as they can generate enough revenues to sustain their operations and pay operating surplus to the government as revenue. This will further reduce the yearly budget deficits of government. Among agencies in this category are NAFDAC and NEMSA among others.  There were also revelations of patently corrupt practices during the investigation as happened on the day EFCC chairman, Abdulrasheed Bawa attended the hearing only to see possible lead for further investigation of a Federal Medical Centre that generates hundreds of million yearly but regularly remit just a million yearly to government while still drawing millions from budget. While commending the Chairman for his painstaking approach in exposing patent corrupt tendencies and bringing revenue to coffers of government, Mr. Bawa said he would have love to go away with the head of the agency in question but for the fact that the parliamentary inquiry is ongoing. Such is the legislative dynamism that Adeola is noted for in addition to fully empowering constituents with training, grants, provision of water, electricity infrastructure, street lights and construction of roads among other projects, that had led to his repeated electoral victories at five different and consecutive occasions. In the 9th Senate three of his 15 bills has been passed by the Senate.

Born on August 10, 1969 at Lagos Island Maternity Hospital, to the family of Mr. Ayinde Adeola Ogunleye and Madam Abeeni Olasunbo Ogunleye (nee Akinola), Yayi began his education at the State Primary School, Alimosho in Lagos State. On the successful completion of his primary education, he proceeded to Community Grammar School, Akowonjo, Lagos. He later went to the Ondo State Polytechnic, Owo now Rufus Giwa Polytechnic, Owo, where he bagged the Higher National Diploma (HND) in Accounting.

Adeola worked in “The Guardian Newspapers Limited”, where he put in almost 12 years of accounting service.   He resigned from “The Guardian” and proceeded to Olatunji Omoyeni &Co where he led the audit team.  Adeola later established his own company, Sootem Nigeria Limited, where he was the chief executive officer until his foray to serve the public through partisan politics.

Adeola, a Christian and philanthropist is happily married to Mrs. Temitope Adeola and the union is blessed with children. At the age of 52 years today, 18 served as a legislator at state and Federal level and still counting, Adeola is setting a worthy record of an experienced legislator and look forward for more service to the people and nation.