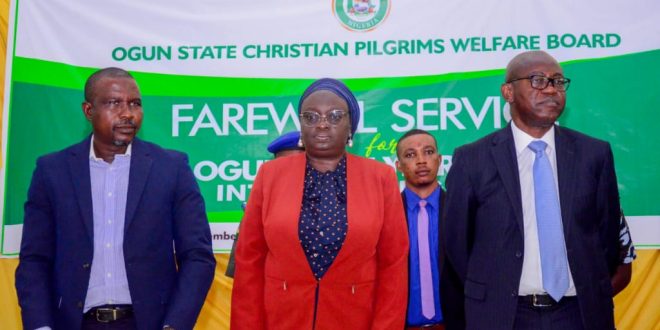 ABEOKUTA: The Ogun State Governor, Prince Dapo Abiodun has tasked intending pilgrims to the land of Israel to see the journey as a spiritual exercise, where their personal spirituality would be increased, saying the essence of the pilgrimage was for further spiritual awakening.

According to a release e-signed and made available to StarTrend Int’l magazine & www.startrendinternational.com by Boye, Press Officer Office to the Ogun state Deputy Governor, the Governor, who gave the charge during a farewell service organised by the State Christian Pilgrims Welfare Board for the 2019 intending pilgrims, at the Oba’s Complex, Oke-Mosan, Abeokuta, tasked them to obey constituted authorities, be good ambassadors of the State, be their brother’s keepers and desist from acts capable of tarnishing their images, the State and the Nation at large.

“I will like you to take advantage of this life time journey, let it not be a waste but an opportunity to develop spiritually. I want to urge you all to also intensify prayers for our government, in order to deliver good governance to the people of the State”, he said.

In his exhortation, the Chairman, Christian Association of Ogun State, Bishop Akintunde Akin-Akinsanya, described the city of Jerusalem as a place, where people would connect to their spiritual roots, noting that the holy land would give pilgrims ample opportunities to have a feel the past, as well as connect to the future.

He admonished intending pilgrims not to see the journey as a jamboree or a shopping spree, rather, seize the opportunity to prepare for the heavenly Jerusalem.

Earlier in his welcome address, the Executive Secretary,Ogun State Christian Welfare Board, Mr.Abiodun Akinwunmi, appreciated the State government for its support towards the board, noting that the 261intending pilgrims had been successfully screened and certified fit for the exercise.

He added that some of the places to be visited include; Church of Nativity, Canan and Mount Tabor amongst others.

Publisher and Editor in Chief - Magazine and Online Tel: 08038525526 - 08023339764 - 08055657329 Email: startrendinter@gmail.com
Previous Chivita 100% wins Brand of the Year at the Global Quality Excellence Award
Next Only Acts Of Deep Humility, Personal Sacrifice Can Root Out Intolerance, Bigotry – VP Osinbajo