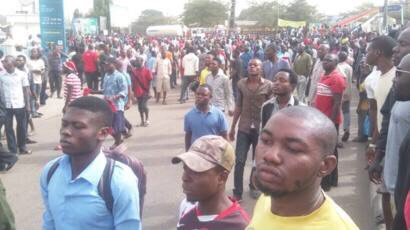 *The protesters at Governor's office, OkeMosan, Abeokuta during the peaceful rally

Save Us From Land Grabbers’ Menace , Ogun Communities Appeal To Govt

Idowu Hamed June 17, 2019 HEADLINE, NEWS Comments Off on Save Us From Land Grabbers’ Menace , Ogun Communities Appeal To Govt 51 Views

By Raymond Osho
Six communities in Oko-Makun, Sagamu, Ogun State on Monday June 17, 2019 staged a peaceful protest at the Governors office, Oke-Mosan, Abeokuta, the state capital, appealing to the State Governor, Prince Dapo Abiodun to save them from land grabbers.

They alleged that the land grabbers were terrorising residents in the communities.

They also aleged that the land grabbers, under the leadership of Otunba Kamorudeen Lamina, (aka Sir K Oluwo) have been destroying their farm crops, alleging that they had also been encroaching on their land since 2014.

Some of the inscriptions on the placards read, “Governor Dapo Abiodun please save us from Sir K” and “Save our souls from Otunba Sir K Oluwo, he is ruining our heritage at Makun Sagamu”.

Speaking to journalists, the Secretary to Communities Development Association, Mr. Lanre Olusanya Dada said Sir K. Oluwo in connivance with one Tunde Ojelabi and other “land grabbers and hoodlums” had been invading their villages with dangerous weapons to seize their land.

He revealed that wife of the Oditan Pataraku family head at Ewu Oje while escaping from land grabbers, fell on her chest and died.

Dada, who spoke alongside a leader of the communities, Captain Michael Adesonubi said that the communities have written so many letters to police formations in the state, but none has yielded any result till now, urging the government to come to their aid.

He said “The land grabbers are now in heavy occupation of the entire land of the six communities, having invaded and sent packing all the land owners, farmers, villagers and thereby depriving them of the ownership of their property and inheritance. We appeal to Governor Dapo Abiodun to please help us and deliver us from this notorious land grabber “.

One of the protesters, Cpt. Michael Adesonubi who also spoke said, the communities, through their lawyer, Wale Ayodele had petitioned the Deputy Commissioner of Police and the Inspector-General of Police Monitoring Unit at the Force headquarters, Abuja on the matter.

His words, “On our way to Abuja over the same issue for the fourth time, we were kidnapped and forced to pay ransom after which three of us were released. Up till now we are yet to see the fourth person since September, 2017.

The Chief of Staff to the Governor, Mr. Salisu Shuaib who latter addressed the protesters, appealed to them to exercise patient, assuring that the Governor would look into the matter.

His words: “Ogun state is not a Banana Island or Save Heaven for criminals. The attack on you is an attack on the government. Your security and protection of your farmlands are utmost importance to the government. Be patient, don’t take laws into your hands. The government will immediately call on security agencies to act.”