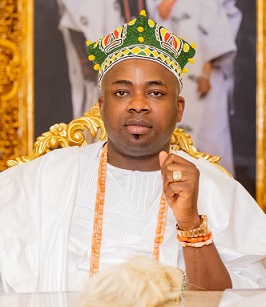 LAGOS – When the instrument of authority was presented to Oba Saheed Ademola Elegushi on April 27, 2010, as the 21st monarch of Ikate-Elegushi kingdom, a coastal community along the Lagos lagoon, the people were ecstatic.

But, there were careful expectations because the Prince, though steeped in the rich pedigree of his predecessors and forbears, was entrusted with leadership at a relatively young age.

He was in his early 30s, but Oba Ademola Elegushi was not unmindful of the huge responsibilities placed on him.
Equipped with robust tutelage from the grandmasters – Asiwaju Bola Tinubu and Babatunde Raji Fashola, both of whom he served in different capacities during their stewardships as Governors of Lagos State, and the goodwill of a wide network of contacts he had built over the years, which cuts across all facets of human interactions, he got down to business, underscoring the fact that he was, indeed, born to do it.
Today (Wednesday, April 27, 2022), as Oba Elegushi celebrates the 12th anniversary of his coronation, the unfiltered feedback is that the people of Ikate-Elegushi could not have had it any better.

Due to his dynamic leadership and vision, this upscale community is now the premium destination to live and do businesses in Lagos as both public and private investors jostle for a presence there.

Ikate-Elegushi is arguably the hottest tourism site in Lagos with its vast private beaches.
Just recently, Lagos State Governor Babajide Sanwoolu, launched the landing of the Equiano Cable Systems in Nigeria, a project of the West Indian Ocean Cable Company (WIOCC) and Google LCC at the site of the company located at the beachside of Ikate-Elegushi kingdom.

Speaking at the ceremony, Chief Executive of WIOCC, Chris Wood, praised the role played by Oba Saheed Elegushi, towards the success of the landing of the Equinao System.

He said the commitment of Kusenla 111 birthed this state-of-the-art infrastructure, which will provide 20 times more network capacity than existing cable systems and link Nigeria with the rest of the world, enabling significant social and commercial developments in Lagos and, by extension, Nigeria.

When the Equiano system commences operation, the economic impact on the host area, Lagos, and Nigeria can best be imagined.

Similarly, in fulfilment of his pledge to ensure improved welfare for his people, Oba Elegushi, in partnership with the Office of the Sustainable Development Goals, Abuja, has completed the upgrade of the Ikate Primary Health Centre with extended services to cover other areas of medical services

like eye and dental care while improving on its primary responsibility of maternal and infant health. The upgraded health facility will be opened to the public in a few days.
It is worth reiterating that this stylish king continues to move with the trend, bringing modernity to tradition while ensuring the fusion of both for the development of his community and solo-economic upliftment of his people.

In appreciation of their support and contribution to the development of Ikate Kingdom, Oba Elegushi will also be conferring chieftaincy titles on eminent personalities which include distinguished political leaders and private sector icons, as part of activities marking this 12th anniversary.
As Oba Saheed Elegushi reminds everyone at every fora that the task of building the society of our dreams remains a work in progress and that he is committed to ensuring that his kingdom and people continue to enjoy the benefits of their God-given resources.

Here is wishing Oba Saheed Ademola Elegushi more peaceful years in service to humanity.
*Temitope Oyefeso who writes from Lagos is Special Assistant on Public Affairs to His Royal Majesty of Ikate Kingdom.