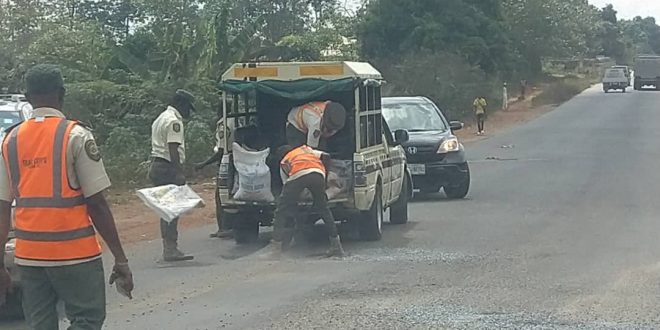 ABEOKUTA – Motorists along Abeokuta Ibadan road have commended officers of the Ogun State Traffic Compliance and Enforcement Corps (TRACE) for embarking on rehabilitation of some potholes along the road with granite recovered from an accident vehicle.

The uniformed officers from the State Traffic Management Agency were seen with shovels and bags removing spilled granites to fill potholes along the Aderupoko, Osiele axis of the Abeokuta-Ibadan road.

According to the Odeda Divisional Commander of TRACE, Mr. Olalekan Adewale who led the officers, explained that the officers decided to use the wasted granite at the accident spot to fill the bad portions on the road to prevent other accident and to make the axis motorable.

While speaking with newsmen, some of the motorists passing through the axis were full of gratitude to the officers and commended the road maintenance efforts of the TRACE officers.

The road users gave kudos to the TRACE Corps officers for going beyond their usual duties of maintaining free flow of traffic to rehabilitate part of the road which was expected to make the road motorable.