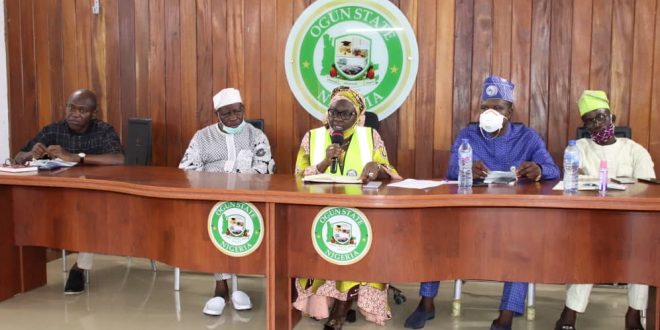 ABEOKUTA: As Ogun State government begins the distribution of the second phase of its stimulus package targeted at the poor, vulnerable and aged, it has charged Local Government Chairmen, who are custodians of the relief items against overlapping, duplication and ensure equity in the distribution process, so that the impact would be felt.

According to a press release e-signed and made available to StarTrend Int’l magazine & www.startrendinternational.com by Oluwaseun Boye, Press Officer, Office of Deputy Governor, Engr. Salako-Oyedele, who gave the charge during a strategy meeting with all the 20 Local Government Transition Committee Chairmen in her office at Oke-Mosan, Abeokuta, said, the feedback from the first phase of distribution did not go well as expected, as necessary measures must be taken, so the second phase could be evenly distributed.

“We want to make sure that all the relief packages are fairly distributed and we don’t do overlapping of the packages by giving to the same set of people this time around, while some do not get at all. As the custodians of the parcels, and with accurate data of the beneficiaries, there is need for us to be extra careful this time, so that we don’t get the kind of feedback that we got in the first phase”, she said.

The Deputy Governor however hinted that there was going to be COVID-19 driving testing across the State, as the Governor, Prince Dapo Abiodun was working with some health agencies to bring driving test into the State, where citizens would have faster access to testing.

In his remarks, the Secretary to the State Government, Mr. Tokunbo Talabi, pointed out that stakeholders involved in the distribution must ensure equity and fairness, urging them to make sure the relief materials get to as many people as possible, with a task on them for an hitch-free distribution during the next phase.

In his submission, the Chief of Staff to the Governor, Alhaji Shuaib Salisu, disclosed that 80,000 relief materials were ready for distribution in the second phase, adding that the distribution would take cognisance of the sizes of the wards, so that the intention of the government to ensure fair distribution would be properly executed.

He added that government would also commence the distribution of face masks across the State, as the mass production of the masks had reached advance stage, which would be shared through the Local Government Areas, saying with this move, wearing of face masks in public places would now be made compulsory, as its usage has helped control the spread of the pandemic across the globe.

The Chief of Staff also noted that guidelines to ensure equitable distribution was to have a detailed log of beneficiaries, involved relevant stakeholders, so that all involved could take responsibilities, as well as provide adequate feedback, so as to achieve accountability at all levels.

Earlier in his welcome address, the State Commissioner for Local Government and Chieftaincy Affairs, Hon. Afolabi Afuape, noted that the meeting was to review past activities of the State in the distribution of relief materials, as well as chart new course for future distribution, in order to achieve a better strategy for the next phase of distribution.

Also speaking, the Transition Committee Chairman for Odeda Local Government, Hon. Semiu Bola Lawal appreciated the efforts of the State Governor, Prince Dapo Abiodun on his proactive efforts at combating the spread of Coronavirus in the State, noting that, at Local Government levels, all hands would be on deck to ensure that the second phase of distribution yield the desired results.

Other stakeholders in attendance at the meeting were; Commissioners for Special Duties, Barr. Femi Ogunbanwo, his counterpart from Women Affairs and Social Development Ministry, Mrs. Funmi Efuwape and Special Adviser to the Governor on Government House, Hon. Babatunde Olaotan.