ABEOKUTA: The Ogun State Governor, Prince Dapo Abiodun has disclosed that the  recommendations and constructive criticisms of the Governor’s Elders Advisory Council would ensure that the enviable position of the State among comity of states is sustained, whilst providing a more prosperous life for the people of the State.

According to a press release e-signed and made availabile to StarTrend Int’l magazine & www.startrendinternational.com by S.F. Ojo, SA, Media to the Ogun Governor, Prince Dapo Abiodun, who made this known at the inauguration of a 56-man Governor’s Elders Advisory Council, held at the Oba’s Complex, Oke-Mosan, Abeokuta, suggested a one-time Permanent Secretary in the old Western Region, Chief Oluseye Okuboyejo as Chairman of the Council.

“I am suggesting that the elders form themselves into an executive, so that if there is a need to have a meeting with me, you will not need to call all the members together. It would be the executive members comprising of a few from each senatorial district that would meet with me in between regularly scheduled meetings, but I will leave the composition of that executive to the elders. “However, I think that I am by virtue of the fact that you have made me your Governor, at liberty to choose for you a Chairman, and I have chosen no other than a revered father, a revered former Permanent Secretary, Chief Okuboyejo to chair this Elders Advisory Council,” he said.

Abiodun, while charging the elders to feel the pulse of the people, urged them to advise his Government after having felt their pulse. While describing with nostalgia how the proverbial dog kept its mother in the sky so as to avoid her death in the midst of drought in the land of the animals, Governor Abiodun said that his administration is determined to draw its elders closer and continuously tap from their wealth of experience.

He added that every leader needs the counsel of people who can speak truth to those in power, adding that his administration will not fail to harness the invaluable resources of its elders. 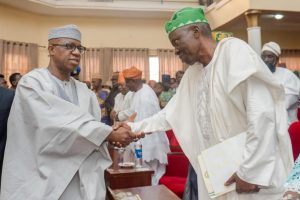 “The Ogun State Elders Advisory Council mimics the dog in the folktale who chose to keep an elder close. Here in Ogun State, we will not disparage our elders. We have literally decided to hide them in the sky like the proverbial dog in other to benefit from their wisdom and wealth of experience. This is the metaphorical food the dog received and which will serve us well here in present times as we remain steadfast in our commitments to delivering on our developmental agenda of building our future together,” he said. His words, “Indeed, every leader needs the counsel of people who can speak truth to power. No one can deny the rich contributions of our elders to the continued development of our dear State. As you our fathers and mothers say: “Ohun tí àgbàlagbà rí l-órí ìjókòó, bí omodé bá gun orí igi gíga, kò lè ri,” meaning that “what an elder will see while sitting, a young person cannot even see it while atop a tree.”

“Our administration has been aware of this fact since inception. For this reason, we have not failed to harness those invaluable resources as we seek to further unleash the enormous potential of our State. We know that we will do well to tap into the rich and varied experiences of our elders who have made indelible marks in their respective professions”.

In his goodwill message, the State Chairman of the All Progressives Congress (APC), Chief Yemi Sanusi said that the event was another bold step by the Governor to display his governance of inclusiveness, adding that the Governor needs the elders as their voice was a voice of wisdom.

In their separate remarks, Chief Adekunle Adesina, Former Ogun Deputy Governor Alhaja Salimot Badru, Chief Tolu Dawodu and Senator Ayo Otegbola said that the Governor has demonstrated that he is a listening governor, urging him to put the house in order, so that when former members of the party come back, they would meet on ground a more robust party system. The elder statesmen, while urging the Governor to continue with his good style of governance, affirmed that his style is not slow, but steady and rewarding, adding that they will support his leadership.

In his response, the Chairman, Ogun State Governor’s Elders Advisory Council, Chief Oluleye Okuboyejo commended the Governor for opting to form the Council and listen to the voice of wisdom from elders who have left indelible marks in their chosen professions, adding that the Council would do its best to give the present administration in the State wisdom and advice that would spur the desired and expected change for the people of the State.