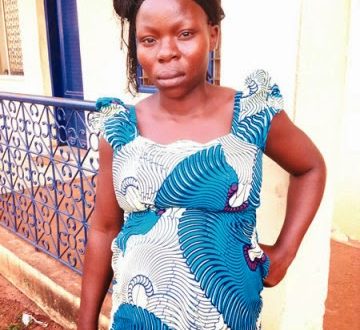 A 37-year-old woman, Mrs. Josephine, has been arrested for allegedly dousing her neighbour, Mrs. Blessing Christopher, 33, with hot water for allegedly greeting her husband.

Blessing, a worker with Lagos State Waste Management Authority (LAWMA), incurred the wrath of Josephine on the night of Tuesday March 26, 2019, at Agbotikuyo, Agege area of Lagos.

Blessing explained that on the night of Tuesday March 26, 2019, as she was preparing dinner for her family in the kitchen, her neighbour’s husband came into the place and greeted her. Immediately she replied, the man’s enraged wife jumped out. Blessing said: “I responded to his greeting by saying, ‘welcome sir.’

The wife, who heard us, came out from their apartment and warned me never to greet her husband. She said that if I tried it again, she would deal with me. I asked her when it has become a crime to respond to greetings.

She said that I should wait for her. I continued with my cooking. A few minutes later, I saw her with a pot; she was hurriedly moving towards me. Her husband tried to block me from her, but the woman went behind me and poured hot water on my back.” Blessing, who was writhing in pain, was in bed when our correspondent went to speak with her. She said:

“Since she poured hot water on me, I have been in pains. The worst situation is that my husband and I don’t have enough money to pay for my medical treatment. I don’t know what I did to that woman. We don’t even have any issue. We are just four months old in the compound. We later heard that most tenants that had moved out of the compound, left because of the woman’s troublesome nature.”

Blessing said since Josephine poured hot water on her, she had not been able to take care of her twins. The twins are just two years old. Her husband was forced to stop going to work in order to mind the kids.

In January, Josephine was alleged to have broken a neighbour’s head during a squabble. The state Police Public Relations Officer (PPRO), ASP Bala Elkana, confirmed the story. Elkana said the suspect had been arrested.