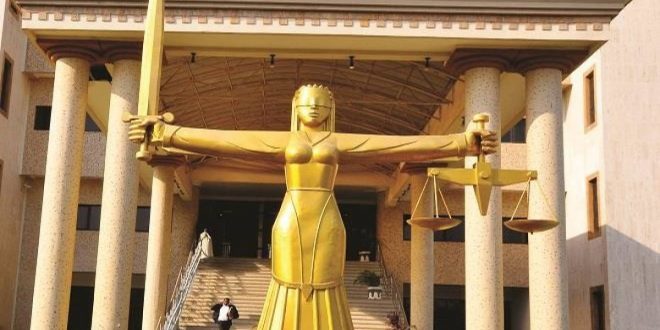 StarTrend May 8, 2019 NEWS Comments Off on Presidential Election Petition Warns Public From Analysing Its Proceedings 15 Views

The Presidential Election Petition Tribunal in Abuja has warned lawyers, the media, litigants and members of the public from analysing its proceedings in the public.

The President of the Court of Appeal, Justice Zainab Bulkachuwa, who leads the five-man panel, issued this warning at the inaugural sitting of the tribunal on Wednesday.

“Any breach will not be condoned and we will not hesitate in taking necessary action against such offenders,” she threatened.

She assured that litigants in the four pending presidential election petitions filed before the tribunal would be given equal opportunity to present their case.

But she warned that the practice of analysing court proceedings and passing a verdict before the court pronounced its judgment in many high profile cases ongoing in the regular court on the social and electronic media would not be condoned for the proceedings of the tribunal.

She said, “We assure all stakeholders that each litigant will be given equal opportunity to present his case in a mature manner before us.

“We are witnesses to what has been happening in high profile cases where such cases are being discussed and publicly decided prematurely in both the social and electronic media before the announcement of the verdict by the court.

“We pray that this time would be an exception for the benefit of the nation. We don’t expect counsel to any of the parties to hype the polity after any sitting by making a public analysis in the media as to what transpired in court.

“These proceedings should be treated as would any other low-profile case, where proceedings in court are not discussed publicly until a decision is pronounced by the court.

“This admonition is also extended to the parties, their respective counsel and the members of the press.

“We, on our own part, will make relevant information available as and when due.”

Previous Bishop Oyedepo Church Under Tension As Boko Haram Makes Another Fearful Demand After Doing This To Members of His Church
Next BEWARE! Doctors Reveal 9 Popular Nigerian Foods That Have Been Damaging Your Brain Unknowingly; Number 8 Is Too Common To Ignore