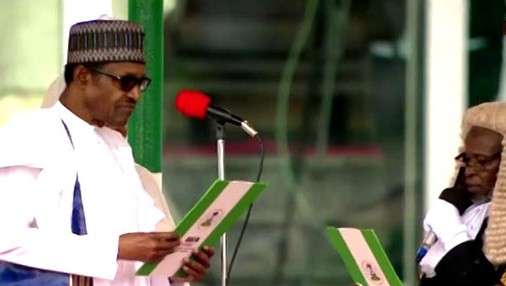 Idowu Hamed May 29, 2019 HEADLINE, NEWS Comments Off on President Buhari Sworn-In After Taken Oath of Office For Second Term 36 Views

President Muhammadu Buhari has been sworn-in for his second term today Wednesday May 29, 2019 as Nigeria’s president in a ceremony at the Eagle Square, Abuja, the nation capital.

Justice Mohammed Tanko, the Acting Chief Justice of the Federation,  administered the oath of office to the President at 10:42 am, shortly after Vice President Yemi Osinbajo took his oath of office.

PMB also swore that he would preserve the Fundamental Objectives and Directive Principles of State Policy contained in the Constitution of the Federal Republic of Nigeria and that he would not allow his personal interest to influence his official conduct or official decisions.

The ceremony was witnessed by members of the first families including the wives of the President Buhari and Osinbajo, Aisha and Dolapo respectively, were among prominent Nigerians, diplomats, presidents, top government officials and politicians at the ceremony.