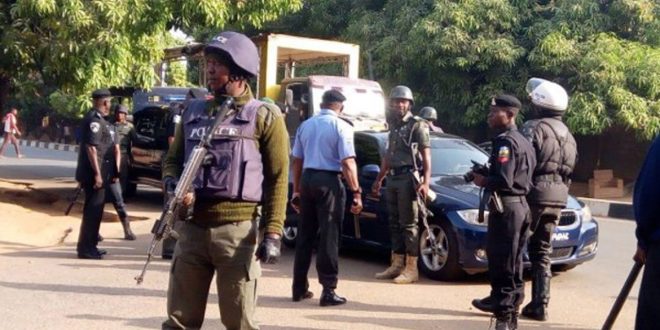 The police in Ogun state have rescued four more kidnap victims suspected to be Pastors of the Redeemed Christian Church of God (RCCG), earlier reported to be kidnapped.

Although, the police did not categorically say they were the kidnapped victims as investigation continues to ascertain that.

Few hours ago, a Deaconess who was also kidnapped was rescued and duly identified by the police as one of those earlier kidnapped.

According to a release signed and made available to the media by the  Deputy Supritendent of Police (DSP) Abimbola Oyeyemi, who is the Command’s Public Relations Officer, Ibelegbo Chidinma who is a Deaconess of the Church was rescued unhurt in the early hours of Saturday, August 3, 2019.

The Police said the only woman among the five victims, identified as Mrs. Ibelegbo Chidimma, have been transferred to the Command’s headquarters in Eleweran, Abeokuta, the Ogun State capital where arrangement was being made to take her to the headquarters of the Church

Oyeyemi said, “The Ogun State Police Command wishes to inform the general public that one of the kidnap victims, Mrs. Ibelegbo Chidimma, the only woman among them, has been rescued unhurt.

The Command later added that it has rescued four other victims abducted on Thursday around J3 forest on Ogbere road, in Ijebu-East Local Government Area of the state.

The news of the pastors’ abduction was announced on Friday by the General Overseer of the RCCG, Pastor Enoch Adeboye during his message at the ongoing ministers’ conference holding at the Redemption Camp, Lagos-Ibadan Expressway.

Adeboye, who said the pastors were on their way to attend the ministers’ conference, reportedly said they were abducted along Ijebu-Ode axis.

He urged members of the church to pray for their release.

“As a father, how do you think I should feel to hear that five of my children have been kidnapped while on their way to attend the Ministers Conference?” the reports quoted him as saying.

In another development, the General Overseer of the Redeemed Christian Church of God (RCCG), Enoch Adeboye has clarified that only one pastor of the church was abducted.

Adeboye had while delivering his sermon on Friday, August 2, 2019 announced that five ministers of the church were kidnapped on their way to attend the church’s ministers’ conference in Lagos.

But in what appeared like a clarification, Adeboye during an address to the congregation at the evening service, said investigations by the police have shown that it was only one pastor that was abducted alongside four other persons.

Adeboye was quoted to have said; “People have been taunting me and challenging me that since I hear from God, how come this is happening to your church pastor’s.

“I want to say it has been confirmed that only one pastor of the church was kidnapped along with four other people.

“That does not reduce the weight of the incidence. The church will continue to pray for the release of all those who have been kidnapped.”

The Ogun state police command announced on Saturday August 3, 2019 that the only woman among the kidnapped victims, who is an official of the RCCG, has been rescued unhurt.