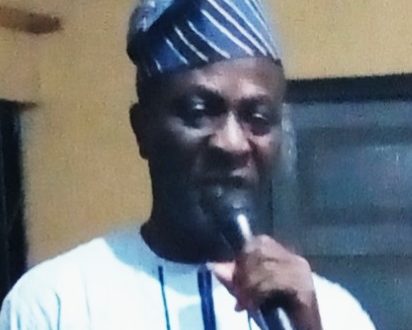 ILARO-YEWA: Principal of the Federal Polytechnic Secondary School, Ilaro, Pastor Wale Olaode has promised to do everything possible with the unflinching supports from the new executives and entire members of Recreation Club, (RCI) to take the rendezvous to the next level.

Olaode stated this in his acceptance speech shortly after he was sworn-in by Alhaji (Prince) Lamidi Elegbede from an election that took place at the clubhouse, GRA, Ilaro, headquarters of Ogun West.

While commending the past executives, the Ipokia-born educationist promised to build on the success of his predecessor, advising that every member of the club should come together to promote oneness.

His words, “I want to use this medium to call on members of this foremost club in Ogun West to come together as one family and let’s take this rendezvous to the next level.

“Majority of us here are retired government officials and grandpas, and we should allow peace and love to transcend whatever differences we have amongst us: which I belief is human.”

Pastor Olaode assured members of the club that his administration shall be guided by transparency and open door policies that will transformed the club to the status of an international clubhouse.

Earlier in his speech, the immediate past President of the club, Chief Safar Jimoh Popoola, the Bobagunwa of Afonland, who was

the first member of the club that will spent two term as President thanked God for the opportunity given him to served his fatherland.

Chief Popoola who is also the Chairman of Ilaro Area PCRC expressed his gratitude to his executives and the entire members of the club for their unflinching supports throughout his four years reign as President of the club.

While reeling out his achievement during his two term in office as President, Popoola noted that he and his team were able to increased the number of membership of the club from 50 to 100.

He revealed how his administration was able to facilitated the donation of a high-tech music system, which was donated by Alhaji Mufutau Olabimtan, MD, Yewa Frontier Hotels, Ilaro.

Chief Popoola also mentioned of a brand new Mikano Electrical Generating set which was donated by another member of the club – Senator Olamilekan Solomon Adeola, fondly called Yayi, who according to him also promised to renovate the clubhouse to international standard.

Hear him, “I want to use this medium to thank Rec. Mufutau Olabimtan and Senator Adeola for the gifts to the club. May God continue to enrich their purse abundantly.

“I want to also thank every member of this our great club for the opportunity given to us to serve you. Kindly extend such support to my successor and his exco, so that they can excel.”

Chief Popoola also posited, “as human being I must have stepped on many toes in the course of my service to humanity and what methinks was best for the interest of the club.

“To err is human, and to those I’ve offended, I apologised most sincerely. Omode ki mo eko je…”

While appreciating the outstanding achievement of the outgone administration on behalf of the club, Alhaji (Prince) Lamidi Elegbede, the Principal of Egbado (Yewa) College, Ilaro who is also past President of the club thanked God for the successful hosting of the AGM by the club.

Alhaji Elegbede who is fondly called Emperor congratulates the new executives and advised them to keep the flag of the club flying to the next level.

The No. 1 Principal in Yewa South Local Government also commended the Alhaji Adebiyi-led REC for a job well-done.

It will be recalled that all the contestants in the free and fair election that was held at the clubhouse on Friday, February 7, 2020 emerged victorious.

According to Alhaji Wasiu Adebiyi, the chairman and returning officer of the RCI Electoral Committee, Pastor Olaode and other officers were declared winners after polling the required numbers of votes, and they were issued certificates of return immediately.

Recall, Recreation Club, Ilaro held its Manifesto Night on Thursday, February 6, 2020 at the clubhouse, GRA, Ilaro, and it was a carnival-like event as candidates presented their manifestos to the house one after the other with different innovative ideas they have for the club.

Members of the REC are Alhaji Wasiu Adebiyi – Chairman, Prince Lamidi Olugbenle – Secretary and Mr. Timothy A. Dada as the ex-officio.

The event was later rounded off with members and well-wishers engaged in jollification till it lasted.