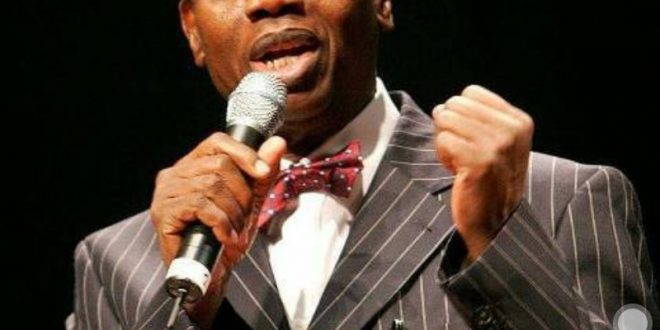 Marriage is the process by which two people make their relationship public, official, and permanent. It is the joining of two people in a bond that putatively lasts until death, but in practice is often cut short by divorce.

Over the course of a relationship that can last as many as seven or eight decades, a lot happens.

On this critical subject, the General Overseer of the Redeemed Christian Church of God (RCCG) Pastor Enoch Adeboye has warned single ladies to avoid marrying jobless men, saying, “Jobless men, have the tendencies to use, dump and abandon such ladies.”
Adeboye spoke on Sunday May 5, 2019, at the May Special Prayer and Thanksgiving service by the RCCG Throne of Grace, National Headquarters Ebute Metta, Lagos.

According to him, a woman should not marry a man that has no work “if not you will be the work.”

He noted it is not sinful for a single lady to politely ask any man proposing marriage whether or not he has a job, stating that, “women are conceived as help-meets, and only somebody who has a job can be helped.”

Adeboye, who spoke through the Assistant General Overseer, (RCCG) Personnel and Administration, Pastor Johnson Odesola, said the man is key and the woman has only come to help.

“Whatever the woman does is help. The man is major director in the house,” he stressed.

He stated taking care of the homes does not rest on the woman alone, but the man and the woman who have come to help. He blamed lack of proper home training for most of the ills in the society.

“I still remember when I was young. My father will tell me that this name is the name of my father. Don’t spoil the name. So I was scared to do wrong. I could not shake the hand of a lady until I was 23. Learning for any child should start from the home and parents should be their child first teachers. The wife and the husband are the main teachers who will teach and model godly character to their children,” he stated.

“Now, the future is the biggest problem. See, your worry about current issues is justified, no doubt. But your biggest problem is, how long will things stay like this?

“Understandably so. You seem like a young lady with a good head on her shoulders. You have managed to look beyond the superficial and the obvious, and you managed to find love in a man many of your peers would never have considered.

“And for that, I must commend you. You were not even looking for potential. You were just looking for love. That is truly admirable. And it is great for now. But it comes with it’s own set of problems. You need to find out whether it is worth staying in a relationship where the man doesn’t work.

“The biggest one, is his self-esteem. I don’t care how strong this man is, sooner or later, this is going to bother him. You go out for dinner and spend more money than he could make as a weekly wage, if he had a job. Surely that must hurt him.

“Interestingly, it is not what happens between you that will bother him the most. It is the opinions of others.

“In our patriarchal society, nobody raises an eyebrow when a wealthy, educated man takes a poor, uneducated, jobless woman and marries her. But the moment the opposite occurs, tongues will wag. People will speak behind your backs.

“And even if he doesn’t hear what they are saying, he will know that they are talking. That is a terrible place to be, for any man.”

Pastor Adeboye continued: “Here’s another thing; he is jobless at the moment. But him getting a job is not going to change the situation. I mean, what are his career prospects? Surely, he is not going to get a middle management position, is he?

“The truth is, everybody knows that we are not all born to be entrepreneurs. Some people just don’t have that spirit. So setting him up in business might be setting him up for failure. Which will be even worse for his self-esteem.

“Does he have a talent? A hobby that he is passionate about that can somehow be turned into a career? I am really trying to explore every single possibility, rather than focus on the negative only.

“See, my biggest worry with all of this is that, the moment his ego and his self-esteem suffer – and this is inevitable, the way things stand now – he will become angry and resentful.

“He will hate his life and he will resent you for making him feel that way. Even though it won’t be your fault, he will blame it all on you. And that may lead to him becoming abusive towards you, just to ‘assert his manhood’.

“You don’t want to be in the middle of that kind of situation. So, only you can determine what happens next. I really do not see a very rosy future for you guys. Unless he presents you with a game plan of some kind, I really don’t see a future for you two.”

Publisher and Editor in Chief - Magazine and Online Tel: 08038525526 - 08023339764 - 08055657329 Email: startrendinter@gmail.com
Previous When They Get There, Let Them cancel Contracts We Have Signed – Ajimobi
Next WHY THE OLUBADAN CANCELLED MY CHIEFTAINCY INSTALLATION – FUJI STAR, OBESERE