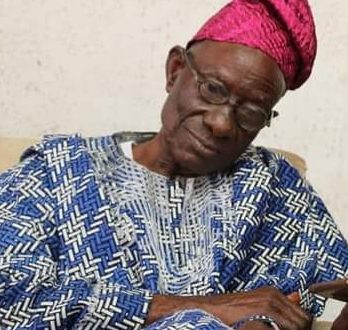 He described the demise of the Oyo-born politician as another great loss to the progressive family in Nigeria.

Pa Ojebode, who died on Saturday, November 14, 2020, at the age of 87, hailed from Oyo West local government area and he was, until his demise, the overall leader of APC in Oyo Federal Constituency.

Oloye Folarin, in a condolence statement made available to journalists in Ibadan on Sunday, November 15, 2020 by his Special Adviser on Media and Publicity, Com. YSO Olaniyi, described late Pa Ojebode as a staunch Awoist.

He said Pa Ojebode will be surely missed by the APC Oyo State and the people of the ancient town of Oyo.

The statement reads: “I’m saddened over the demise of our father, great leader and benefactor, Pa Samuel Ojebode. Baba was a thorough-bred Awoist all through his lifetime. His contributions to progressive causes and my electoral victory in 2019 are immeasurable. Baba’s last most crucial political assignment on earth was marked with monumental electoral victories as he delivered House of Assembly seats, House of representatives seat and Oyo Central Senatorial seat to APC.

He hosted peaceful, fruitful and rancour-free APC meetings of the Oyo Federal Constituency. He was an exemplary leader, considering his boldness, oratory prowess, bluntness, integrity and dexterity.

“I will miss Baba. He was quite steadfast and dogged in defence of good governance and his death has robbed the progressive family of one of its eloquent defenders. Pa Ojebode, until his death, played vital roles in the stability and reconciliation process in Oyo APC.

“I commiserate with His Imperial Majesty Oba (Dr.) Lamidi Olayiwola Adeyemi III (the Alaafin of Oyo), Dr. Sokan Ojebode (founder of Atiba University) and the Ojebodes as well as the APC worldwide.

“May Pa Ojebode’s soul find solace in the bosom of our God as I pray that all of us – his sons, social and political colleagues and families– have the fortitude to bear his loss” the statement concluded