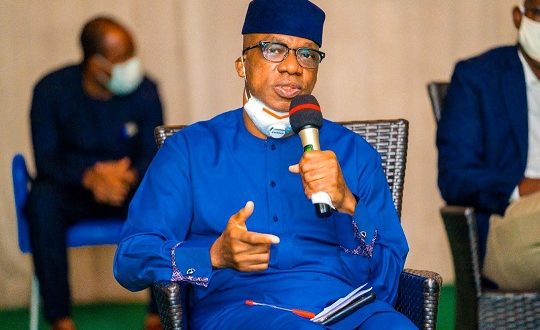 Our Decision To Test Factory Workers Paid Off – OGSG

ABEOKUTA: The Ogun State Government has said that its suspicion and decision to test all essential workers of factories and companies who were exempted to work during the lockdown is a good step in the right direction.

According to a press release e-signed by and made available to StarTrend Int’l magazine & www.startrendinternational.com by Hon. Remmy Hazzan, Special Adviser to Governor Dapo Abiodun on Media and Public Communications, who made this known while fielding questions from newsmen in Abeokuta said, “if this proactive measures had not been taken, so many would have been infected without knowing which could be dangerous to the State at large”.

Hazzan noted that out of the 108 positive cases that was recorded on Tuesday, June 9, 2020, 104 were discovered from a single factory with an assurance that, “there is no cause for alarm or panic as the cases are asymptomatic and government is on top of it.”

The Special Adviser further disclosed that the medical team of the State government are on contact tracing of the infected persons who are most likely to also be asymptomatic adding that a good number of the workers who tested positive reside in the factory’s facility.

According to the Governor’s media aide, “we are not loosing the battle with the Covid-19 pandemic. Our decision to go and test the staff of those factories who were exempted to work during the lockdown actually paid off. The State did the right thing by testing the workers of these companies.”

Speaking on the State’s preparedness in case of any surge, the Special Adviser said, “though we are not praying for a surge in the number of positive cases but if it happens, the State presently has the infrastructural capacity to handle it. It is better to have it ready and not need it than to need it and not have it”.

Hazzan added that the State government had distributed a million nose masks to all local government areas of the State, faith-based organizations, student union bodies, market places, as well as workers adding that there is an enforcement task team who have been saddled with the responsibility of enforcing compliance; of safety measures.

Tags Our Decision To Test Factory Workers Paid Off - OGSG#