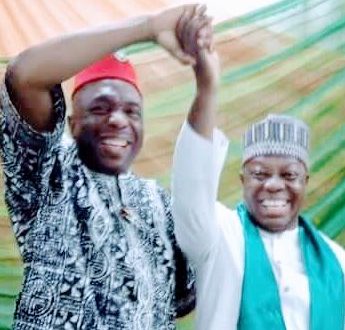 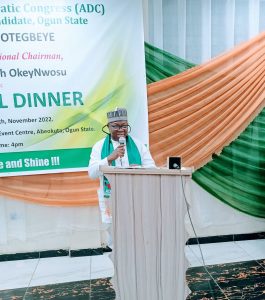 …Says, “Biyi, You Are Going To Become Governor In A Special Time

ABEOKUTA – The National Chairman of African Democratic Party (ADC), Chief Ralph Okey Nwosu has said that the ADC Governorship candidate in Ogun State, Barrister Biyi Otegbeye, is on the path to victory in the 2023 elections.

According to a release e-signed and made available to StarTrend Int’l magazine and online – www.startrendinternational.com by Wole Elegbede, Special Media Aide, BOT Media Office, Nwosu made this known at a recent dinner organised in his honour in Abeokuta and hosted by Barrister Otegbeye.

Ha appreciated the leaders of the party who were present at the event, and specifically mentioned Chief Derin Adebiyi and Hon. Matemilola Adelanwa. 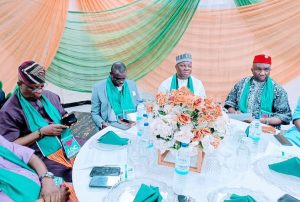 Chief Nwosu was accompanied by the ADC National Coordinator (Communications and Programmes), Ifenla Onigbinde, the South West Vice-chairman of the party, Rasak Eyiowuawi and his strategic Adviser, Halil Balogun.

The ADC Chairman said that the emergence of Otegbeye is prophetic, saying: “Sometime in August, one of my brothers here (He accompanied me to this place; I invited him specially), he told me that the governor of Ogun State will be ADC. And he said that SIA …will play a major role in moving Ogun State forward. By then I’ve not heard big Biyi. I can assure you that it was early in August that he told me. I didn’t take it serious. But today, when I reflect, I can see the wonders of God”.

He opined that people used to describe Ogun State as a Gateway State in a limited sense, but it’s more than that.

He explained: “Ogun State is the Gateway to Nigeria. Unfortunately it has not been well defined. It is also a Gateway to Africa. You define the role of Ogun State in Nigeria. 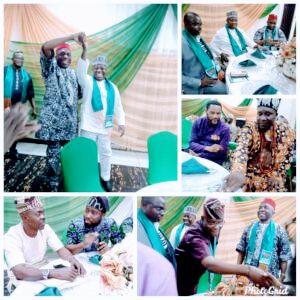 “Somehow, you don’t capture the role of Ogun State in Africa. Our man, our father, our Baba (former President Olusegun Obasanjo) is not just Baba of Nigeria. He’s the Baba of Africa”

According to the ADC National Chairman, Ogun State is a blessed state with people of high calibre who have contributed immensely to the development of Nigeria like Chief Obafemi Awolowo, Chief Moshood Abiola, Chief Olusegun Obasanjo, Professor Wole Soyinka, Chief Shonekan, and to add SIA (Senator Ibikunle Amosun), who is going to take over the leadership where the founding fathers left it.

“Biyi, you are going to become governor in a special time. The governor of a time to show in word and in faith that Ogun State is a true Modest State where OBJ and SIA are the shinning lights.

“And I can see your amiable Deputy Governor. With the legal and insurance background of our Governorship candidate and the industrial background of the running mate, Ogun State will set a pace in development that other parts of Nigeria will follow.” 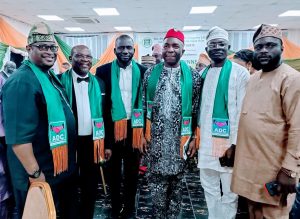 In his response, Otegbeye said he was happy to meet Chief Nwosu, adding that he was able to survive the recent tussle at the national level because of his integrity.

He stated: “I had the opportunity of speaking with you twice during that crisis, and I assured you at that time and I am reassuring you in the presence of everybody in Ogun state that we are solidly behind you.

“We will not allow your legacy, your hardwork, your diligence to build this party to this level to be rubbished by anybody”.

The ADC governorship flagbearer disclosed that he organised the dinner because he wanted the National Chairman to see the quality of ADC representation at all levels and to show that the ADC in Ogun State is focused and ready to win the election.

He stated that the competitors of ADC did not take the party serious until a month ago when they saw the party’s large followership, and they resorted to intimidation and threats to cower members of ADC.

“But unknown to them, the more they intimidate the more we are strengthened”.

According to him, 24 lawsuits have been filed by the competitors against him and House of Assembly candidates, saying such cases were frivolous, intended to distract, and they will fail.

Speaking on the current leadership in Ogun State, Otegbeye noted: “I have never seen anybody so unprepared to govern like the man there. This was a man who wanted to address the state, and never read his speech until the time not the address only in the face of television to be correcting his speech. 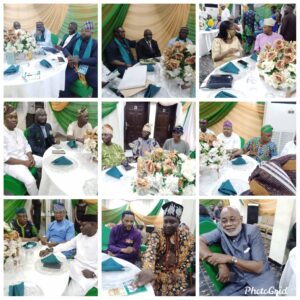 “That’s just figurative of how unserious and unprepared anybody can be for leadership. But thank God there days are numbered and they only have four months”.

A leader of ADC, Chief Derin Adebiyi, said the ADC is a party to beat in the 2023 election.

“Mr. Chairman sir, if anybody tells you that ADC is not on the ground or that Senator Ibikunle Amosun is nobody, they don’t know what they talk about”.

He stressed that the combination of ADC election office seekers will trigger unprecedented development in the state.