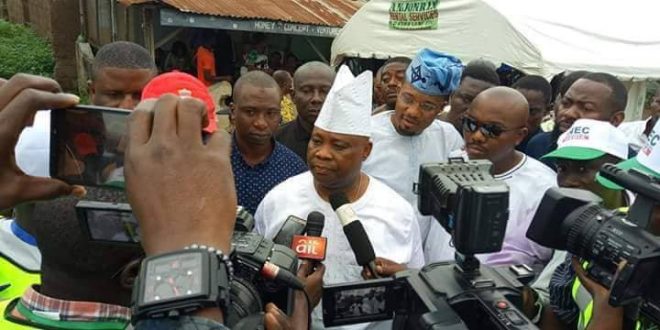 The Peoples Democratic Party (PDP), candidate in the inconclusive governorship election in Osun State, Senator Ademola Adeleke, has thanked electorate in the state for their kind support in Saturday’s governorship poll.
Adeleke led the race with 254,698 votes, 353 votes more than that of Gboyega Oyetola of the APC.
The margin was, however, less than the 3,498 votes in the polling units where voting were cancelled.
Consequently, the Returning Officer for the election, Professor Joseph Afuape, declared the poll inconclusive.
But, Adeleke in a statement he personally signed on Sunday September 23, 2018; said he was honoured to have won considerable votes across all local governments of the state despite the “blackmail” during electioneering campaign.
He, however, appealed to the people to rededicate themselves to the ‘struggle, adding that ‘the tyrants can be forced to submit to the will of the people.


The statement reads, “I sent my appreciation through this medium to Osun voters who find me worthy of their votes. Your votes humbled me and further strengthen my resolve to truly serve our people.
“Despite all the blackmails and persecution, you stand by me, you voted for me and you defended your votes. You adopted me as the rallying point of the redemption movement. Words cannot express the depth of my appreciation.
“We will get to the promised land. It started well and it will end in praise to our dear God. Let us rededicate ourselves to the struggle. You have proved that with determination, the most powerful tyrant can be forced to submit to the will of the people. I appreciate you all.”
Osun Decides: Adeleke Finally Breaks Silence On Inconclusive Election# 2018-09-24
Idowu Hamed