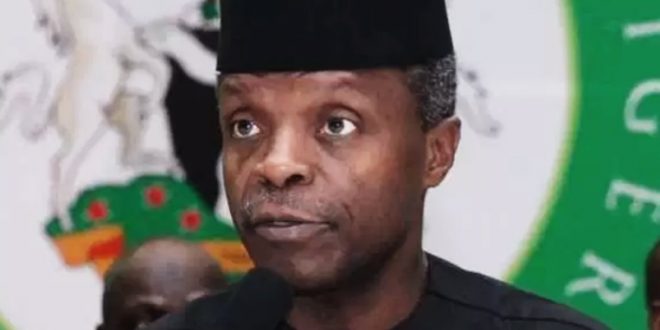 ABUJA: The partnership between Nigeria and the United States is one that would continue to produce mutually desirable results for both countries, according to Vice President Yemi Osinbajo, SAN.

According to a release signed and made available to StarTrend Int’l magazine and Online by Laolu Akande, Senior Special Assistant to the President on Media and Publicity, Office of the Vice President, Prof. Osinbajo stated this on Friday at the Presidential Villa, Abuja, when he received the Administrator of the US Agency on International Development (USAID), Mr Mark Green who is currently on a visit to Nigeria.

Noting that the US is one of Nigeria’s most dependable development partners, the Vice President said the Nigerian government was grateful for the interventions in the areas of health, humanitarian issues and education.

While stating the commitment of the Buhari administration to improve the country’s education sector, and the President’s resolve to enforce free and compulsory basic education for every child of primary and junior secondary school age; Prof. Osinbajo noted that a lot more can be done with cooperation between both countries.

He said, “This is an area where Mr. President particularly has a personal commitment. On June 20th, in a meeting with State Governors, he made the point that we are going to enforce a nine-year free and compulsory basic education for children. He felt that this was not just a moral obligation, but, of course, to educate and develop future generations, especially female children.

The Vice President said there could be more cooperation in the area of teacher training, skills development, child education, especially girl-child education, among other interventions in the education sector.

Prof. Osinbajo also highlighted the need for more development partnerships in the areas of improving the country’s power sector and security, noting that the Federal Government has been putting a significant amount of work in developing renewable energy and providing solar power in rural areas and other parts of the country.

According to him, “In the power sector, we find that renewable energy is an area we want to do more in. And in many parts of the country, we find that solar power would be advantageous for us, and we’re trying to do a lot in that area. The Power grid itself has had various challenges. We think the fastest growth, especially in rural areas is solar power. In that respect, we’ve done a fair amount of work.”

While acknowledging US military assistance, the VP noted that the Federal Government would also welcome more cooperation in tackling humanitarian challenges in the North East of the country.

In his remarks, Green; who was accompanied by the US Ambassador to Nigeria, Mr. Stuart Symington, said the US and Nigeria have a deep friendship based on shared values and shared priorities.

He described as admirable President Muhammadu Buhari’s personal commitment to ensuring compulsory free education for Nigerian children, stating the US looks forward to working with the Nigerian government on developing its education sector, tackling security challenges and improving economic indices.

He said, “We have particular interest in continuing our very strong partnership in providing humanitarian assistance, particularly in areas in the North; working together on economic opportunities, particularly in rural areas; creating strong sustainable futures for farmers and herders; and looking for ways to tackle some of the challenges that we both see in building lives and communities.”

Earlier in the day, the Vice President also received a delegation from the Andrew J. Young Foundation, led by civil rights activist and former US Ambassador to the United Nations, Andrew J. Young.

The Vice President described Young as one of the major icons in the US civil rights movement, saying that Young has played “very important roles in the life of our nation and influencing positively many of our leaders.”

In his remarks, Young commended the Buhari administration for “being able to hold this country together in spite of the differences” and ensuring democracy prevailed.

Publisher and Editor in Chief - Magazine and Online Tel: 08038525526 - 08023339764 - 08055657329 Email: startrendinter@gmail.com
Previous Ogun Govt Don’t Joke With Education of Her Citizens, Says Iyaloja Of Ilaro
Next How Pogba Reacted To Recent Racist Abuse After Losing A Penalty Kick