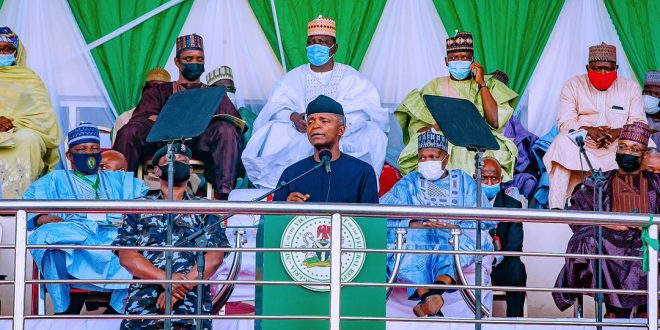 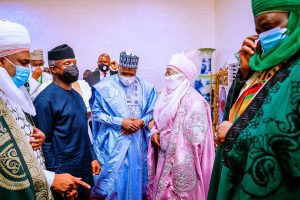 GOMBE – Vice President Yemi Osinbajo SAN, has said that a major strength of the Nigerian economy lies in the innovation and entrepreneurship of its young people, which is a key reason why the Buhari administration is focused on supporting small businesses and the innovative ideas of young Nigerians.
According to a release e-signed and made available to StarTrend Int’l & online – www.startrendinternational.com by Laolu Akande, Senior Special Assistant to the President on Media & Publicity, Office of the Vice President, Osinbajo stated this on Tuesday, March 30, 2021 at the 27th edition of the Micro, Small and Medium Enterprises (MSMEs) Clinics in Gombe State.
The Vice President also highlighted the impact of the Survival Fund scheme – under the Economic Sustainability Plan (ESP) – of the Buhari administration in supporting MSMEs and safeguarding millions of jobs nationwide.
Commending the efforts of the State government in harnessing the entrepreneurial talents of youths in the State, the Vice President said, “I am glad to note the commitment of the State government to invest in young people and their innovative efforts.” 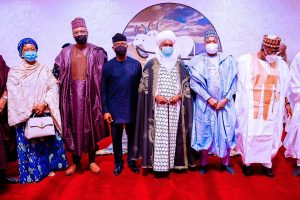 Continuing, he said, “at the height of fears about obtaining ventilators, I read about three young men who invented Nigeria’s first medical grade ventilator, right here in Gombe. One of them, Aliyu Hassan, spoke about how they had worked from a room in his home, where they ate, slept and worked on their invention.”
Speaking about the Federal Government’s efforts in creating more opportunities for young Nigerians, the Vice President said the Buhari administration is investing in Shared Facilities for some aspects of the agro-processing and other value chains across the country.
According to the Vice President, “the National MSME Clinics programme has facilitated the establishment of Shared Facilities for MSMEs in Lagos, Bauchi, Oyo and Benue States, with others to be established in Kaduna, Kebbi, Anambra, Ogun, Ebonyi, Edo, Katsina and Kano States over the next one year.
“These Shared Facilities will provide fully-equipped cluster-style spaces that MSMEs can use at a reasonable cost, thus sparing them the financial burden of having to buy their own equipment. Where possible, these Shared Facilities will be pre-certified by relevant regulatory agencies.” 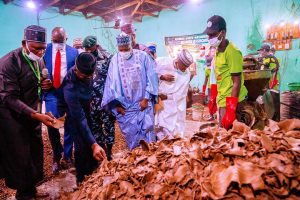 Citing the example of the 200,000-capacity yam storage facility for MSMEs at the Zaki Biam International Yam Market in Benue State, Prof Osinbajo said, “the storage facility is designed to address the problem of Post-Harvest Losses (PHL), which is one of the greatest impediments to fully actualizing the immense potential of the agriculture sector.”
Justifying the Federal Government’s intervention at the market, the Vice President had stated then that, “Nigeria produces 17 million tonnes of yams annually, but loses up to 40% of this yield due to the lack of adequate storage.”
At the 27th edition of the National MSME Clinics, Prof. Osinbajo said the Clinic is a Federal Government initiative to work with State Governments to support small businesses. The last edition (26th) was held in Nasarawa State in 2020.
The MSMEs Clinics, driven by the Vice President, is a Federal Government initiative, whose major focus is to work with State Governments to support small, medium enterprises. 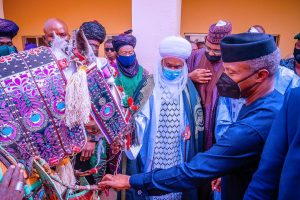 According to the VP, “the obvious reason is because MSMEs are indisputably the engine of growth in any economy. MSMEs also employ the largest numbers of people. So, the MSME Clinics were designed to bring regulatory agencies whose work affects the business experience of MSMEs to meet with MSMEs on the spot.
“This gives MSMEs an opportunity to bring their business-related concerns to the attention of regulatory agencies for solution, outside the formal and sometimes intimidating head offices of these agencies.”
Giving an update implementation of the Survival Fund in Gombe State, Prof. Osinbajo said “Gombe State Government has been actively engaged to ensure that its citizens benefit maximally from all tracks in the MSMEs related schemes.”
He said “in all, MSMEs in Gombe State have been supported by the Federal Government with almost N1.2 Billion under ESP schemes to cushion the effects of the pandemic on small businesses. There is more to come as I have been informed by the Chairperson and Project Coordinator that additional businesses and employees in Gombe State are currently undergoing verification with a view to being short-listed for payment.” 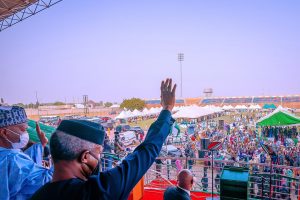 Giving a breakdown of the implementation, Prof. Osinbajo said, “on the Payroll Support Scheme, for Gombe State alone, we have paid out almost N1 Billion to over 9,085 employees from close to 2,000 MSMEs in the educational sector.
“We have disbursed over N200 million to nearly 10,000 artisans and transporters in the state. Up to 6,000 new business names have been registered free of charge with the CAC.”
Commending the efforts of the Federal Government, Gombe State Governor, Alhaji Muhammad Inuwa Yahaya, said the State Government’s commitment to invest in youth entrepreneurship is prompted by the desire to tap from the abundant talents available in the state.
He thanked the Vice President for flagging off the Clinic in the State, noting that he is a worthy example and a strong supporter of youth entrepreneurship.
Present at the flag off event were the Minister of Communication and Digital Economy, Dr. Isa Alli Pantami; Minister of State for Industry, Trade and Investment, Amb. Mariam Katagum; former governor of Gombe State, Senator Danjuma Goje; members of the National Assembly, among others.
Photos; Tolani All. 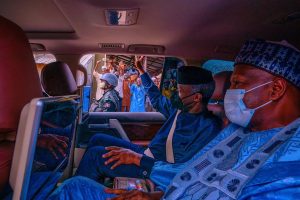