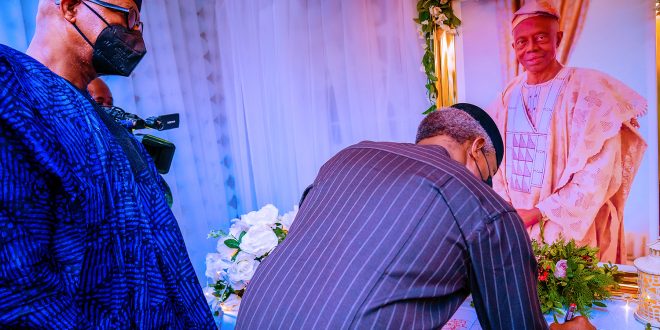 IPERU-REMO – Vice President Yemi Osinbajo SAN, has said that Pa Emmanuel Adesanya Abiodun, the late father of the Ogun State Governor, Prince Dapo Abiodun lived a fulfilled life and this is why his memory is cause for celebration.

According to a release e-signed and made available to StarTrend Int’l & online – www.startrendinternational.com by Laolu Akande, Senior Special Assistant to the President on Media & Publicity, Office of the Vice President, Osinbajo stated this on Saturday, August 27, 2021 at Iperu, Ogun State where he paid a condolence visit to Governor Dapo Abiodun and the family over the transition of their 89-year old father.

According to Prof. Osinbajo, he was in the State to deliver President Muhammadu Buhari’s condolences noting that “I am here with my brother, Dapo Abiodun, certainly not as a visitor. This, as you all know, is home for me. Papa was my father, and so, I am here to represent the President of the Federal Republic of Nigeria.”

While expressing commiserations, the Vice President noted that “there are three reasons at least, why we should be rejoicing and not mourning. The first is that Papa lived a long life, almost 90, a year to his 90th birthday, that is a good number.” 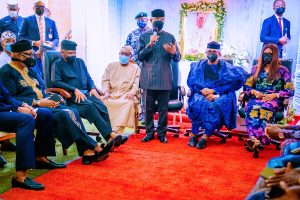 “The second is that before he died, I don’t think that there was any prayer of his that was not answered. I think one of his important prayers was for his son, who had aspired to be governor of Ogun State, and he is in fact the governor. Papa saw the inauguration of his son as governor. He was there for his first year, second year, and he did so with great joy.

“The inheritance that Baba left behind is the path of Jesus Christ, the path of truth, that is the footprint he left behind, and that is what he bequeathed his children. I am very happy that our governor has taken this seriously. I know that all through the period of the campaign and before, he was praying and fasting,” Prof. Osinbajo added.

Continuing on the legacies of the late Pa Abiodun, the VP said “I am extremely pleased to say to you today that we are rejoicing and celebrating the life of an incredibly great man who was not only known for his own contribution to society as a teacher, but also the fact that all through his life, he supported all the worthy causes, and was himself a progressive.

“So, you cannot speak about quality progressive ideas without mentioning his name. So, we are all truly grateful to the Almighty God that he has lived this purposeful life.” 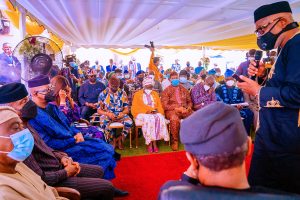 Offering prayers for the family and consoling the people of Ogun State, Prof. Osinbajo said “we can only pray that Mama will live long. They have been married for 65 years, and that is a very long time.

“I pray that she will see even more of her grandchildren in joy, and when the time comes for her going away, it will not be in pain, she will not be sick, all will be well with her in Jesus name.

“I want to again just express my condolence to you and all the members of the family and to Ogun State, because the loss of the first father of the state is a big loss.”

The Vice President also wrote a short tribute in the condolence register at the Abiodun family compound thus” “We bless the name of the lord, for his great gift of the excellent life and times of our father, Pa Emmanuel Adesanya Abiodun. We thank God for a life of service to man and as a teacher of teachers. But above all, we thank God for the grace of salvation by which we know that he now lives in joy and peace with our Lord Jesus Christ. Halleluya!!!” 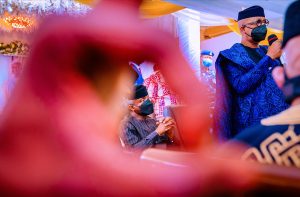 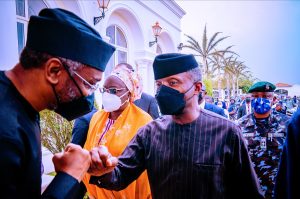 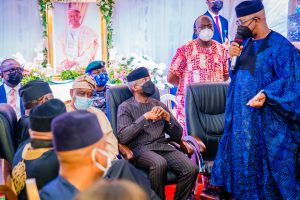 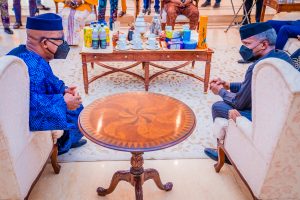 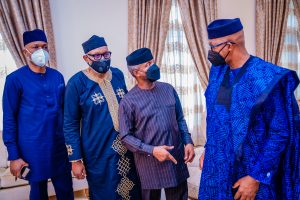 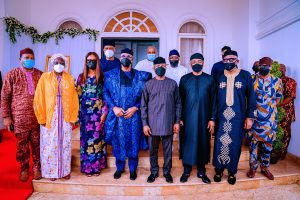