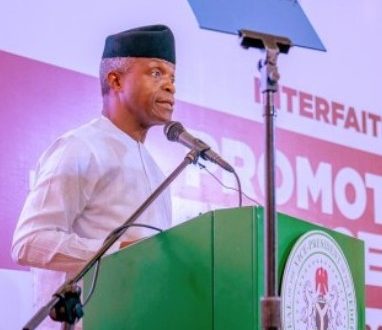 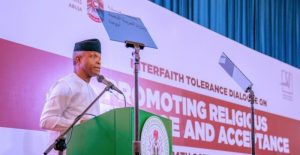 ABUJA: The Vice President, Prof. Yemi Osinbajo (SAN), has said that the Federal Executive Council’s approval of the UNESCO International Convention Against Doping in Sport is a step in reaffirming Nigeria’s commitment to the high values of the Olympic movement of fairness in sporting competition.

According to a release e-signed and made available to StarTrend Int’l magazine & www.startrendinternational.com by Laolu Akande, Senior Special Assistant to the President on Media & Publicity, Office of the Vice President, Prof. Osinbajo stated this on Wednesday November 13, 201, at a dinner in honour of the President of the International Olympic Committee (IOC), Mr Thomas Bach and members of the Association of National Olympic Committees of Africa (ANOCA) in Abuja.

According to the Vice President, “Just this morning, the Federal Executive Council unanimously approved the UNESCO International Convention Against Doping in Sport. Taking an important step in reaffirming our commitment to the high values of the Olympic movement of fairness in sporting competitions.”

Continuing, Prof. Osinbajo assured the visiting IOC president that, “Nigeria will continue to play a leading role in the African Olympic Movement and whenever the opportunity presents itself, we will still bid to host a major Olympic event,”.

He added that the visit to Nigeria by the IOC President and his team and the commissioning of the headquarters of ANOCA further confirmed Nigeria’s position in sport development in Africa.

“…it is quite significant in that it indicates the preeminent place that our nation occupies at the heart of the International Olympic Movement. It is equally a mark of recognition for our country as one of the leading sporting nations of Africa.

“It is a matter of national pride to us that Nigeria has been in the vanguard of promoting the noble ideas of the Olympic Movement in Africa, especially since 2006, when Nigeria won the Bid to host the Headquarters of the Association of National Olympic Committees of Africa (ANOCA).

“Nigeria has now fulfilled the terms of the Headquarters Agreement by providing a befitting building to host the Secretariat of ANOCA. And we are delighted to say that Abuja has indeed become the Olympic Capital of Africa.”

Still on Nigeria’s commitment to the development of sports and the Olympic movement in Africa, the Vice President said Nigeria will provide the condusive environment for her athletes to perform better at the 2020 Olympic Games while pledging support for Senegal’s hosting of the Youth Olympic Games 2022.

He said “Although, our country did not win the Bid to host the Youth Olympic Games in 2022, we are very happy that the hosting rights were awarded to Africa and eventually to our sister country, Senegal.

“We commend the International Olympic Committee for reserving the 2022 Bid for Africa and pledge our full support for Senegal in their historic effort to stage the first Youth Olympic Games in the continent.

The Vice President thanked the IOC for ongoing scholarship opportunities for Nigerian athletes and the prospects for stronger partnerships with the organization through provision of platforms for high performance training and development of the country’s elite athletes, coaches and administrators.

Earlier in his remarks, the President of the IOC, Mr Thomas Bach acknowledged Nigeria’s support and commitment to the development of the Olympic movement in Africa and the world.

He said thanked the government of Nigeria for the warm reception and pledged the IOC’s continued partnership with the Olympic movement in Nigeria.

Mr. Bach and other members of the delegation from IOC and ANOCA had earlier in the day paid a courtesy visit to Vice President Yemi Osinbajo at the Presidential Villa.